Haida Gwaii is one of the most exciting outdoor adventure destinations on the continent. Requiring an eight-hour ferry ride or much shorter plane ride to reach, the archipelago of 150 or so islands is sometimes referred to as Canada’s Galapagos for its diversity of plant and animal life, with old-growth Sitka forests, deer, eagles and whales among the many natural attractions. There are over 500 archeological sites scattered throughout Haida Gwaii, with totem poles, longhouses and fishing camps attesting to a vibrant and long-standing First Nations presence. From hot springs to hiking trails, secluded beaches and charming villages, there is lots to see and do in Haida Gwaii, and our Haida Gwaii Waterproof Map is your ultimate guide to the area. Here are a few of our favourite things to see and do on the islands.

Referred to as Gandll K’in Gwaay.yaay in the Haida language, this small island is home to a natural hot spring originating from an unknown source. Although the springs were affected by a strong earthquake in 2012, they have since resumed flowing and three new soaking pools have been constructed for visitors. While you soak you can enjoy stunning views over Juan Perez Sound, which is home to pods of orca whales and several rare seabirds such as Cassin’s auklets and ancient murrelets. A permit is required to visit the springs, which can only be reached by boat or kayak. Please also note that visiting hours are limited to 8:30 am to 8:30 pm to protect the rare Keen’s long-eared bat which lives on the island.

This 290 hectare (716 ac) intertidal wetland has easy access right from the Village of Masset. Situated on the Pacific Flyway, this is an important stopping point for numerous bird species, with over 150 species recorded. Some of the more rare specimens include bar-tailed godwit, brambling, cattle egret, Smith’s longspur, tufted duck and wood sandpiper. There are also many birds who come here in the summer to nest. This is the only migratory birds sanctuary on Haida Gwaii (and in the entire Skeena region), and is renowned internationally for its birding opportunities.

Located 16 km from the Village of Masset, this park is home to nearly 100 km (60 mi) of beautiful sandy beaches. The park’s north beach is especially scenic while Rose Spit is a prime location for birding. Hiking along the beaches is a popular way to explore the park, and there are numerous places to camp along the way. One trail leads to the Pesuta Shipwreck, which ran aground back in 1928. For anglers, there is excellent fishing for coho and steelhead in the Tlell River, and Mayer Lake is known as a great fishing destination as well. 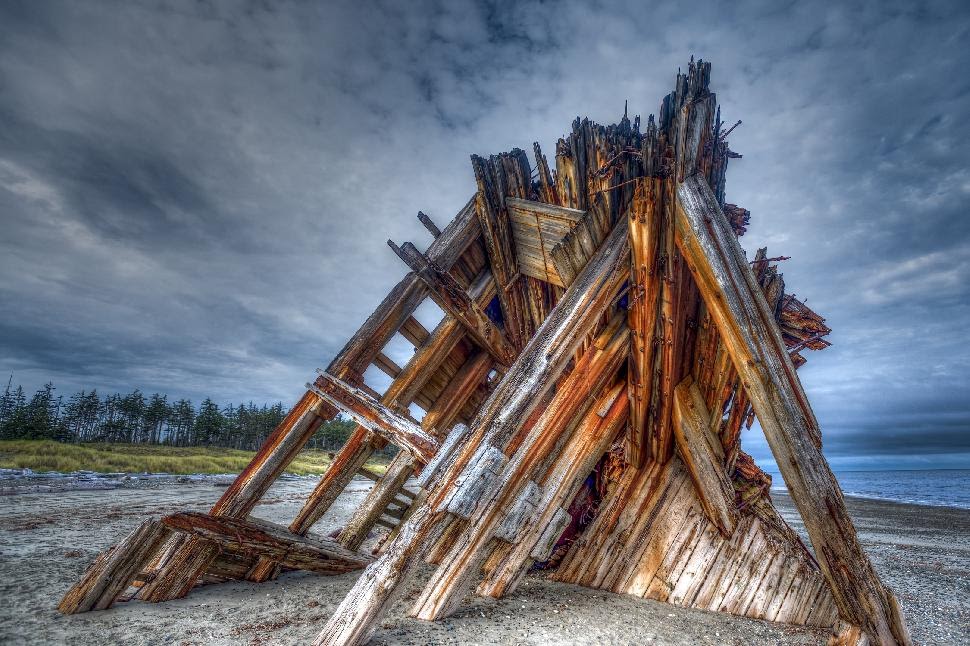 The majestic old-growth forest is one of the defining characteristics of Haida Gwaii, and there are several locations where you can go to witness its beauty. A hiking trail known as Old Growth Alley leads you along the lower Tlell River and is one of the best ways to see the islands’ monster trees. Near the Yakoun River, you can find a giant Sitka that is tied for the largest of that species in the province, measuring 13.6 metres (45 ft) in circumference or 4.3 metres (14 ft) in diameter. Or, hike to the site of the famed Golden Spruce, felled in 1997 as protest against the logging industry. There are some impressive trees to find in just about any part of Haida Gwaii! 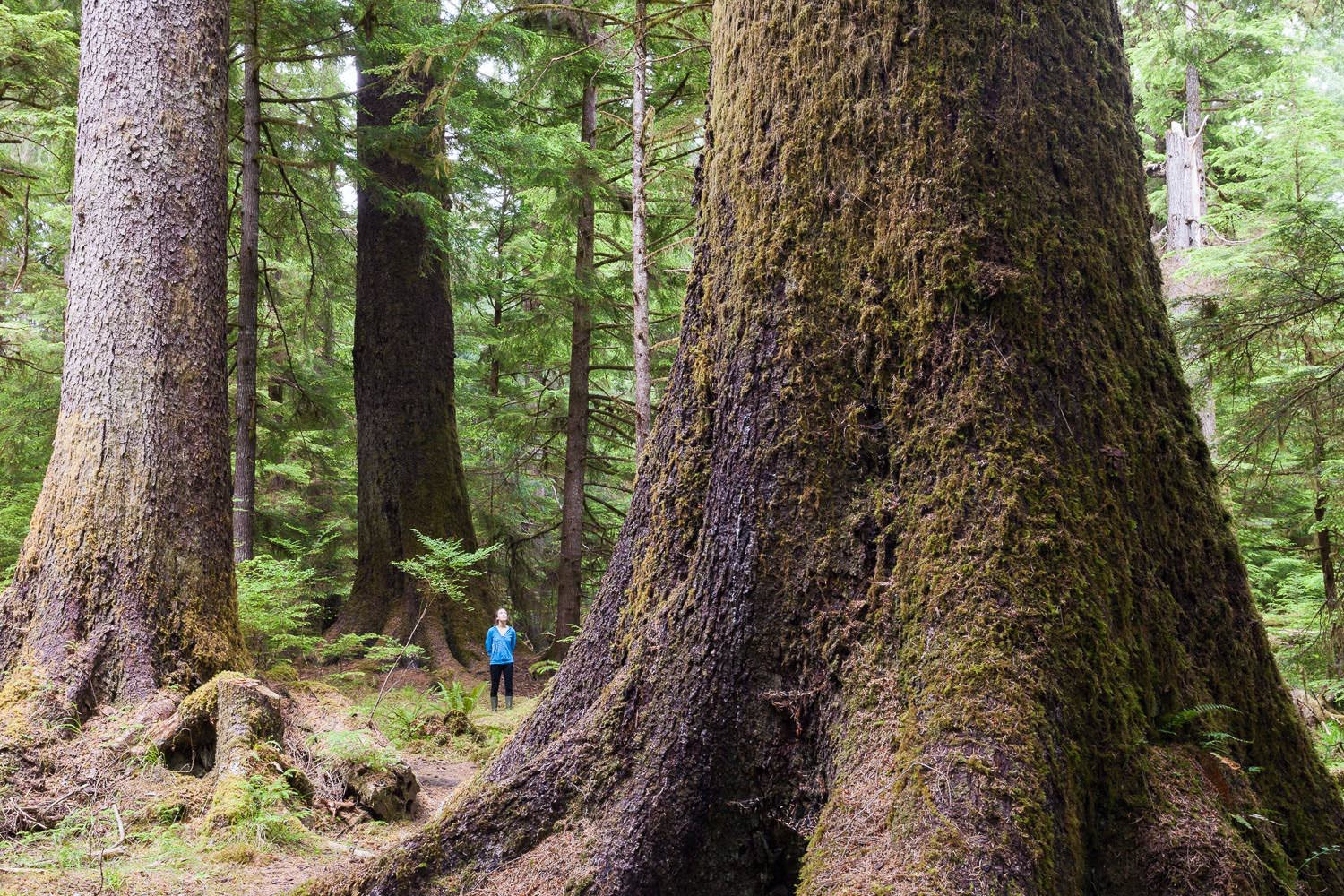 Also known as Skedans, this ancient village is found on the northeast corner of Louise Island and, at its height, was home to between 26 and 30 longhouses. There have also been more than 50 pieces of monumental sculpture recorded here including mortuary poles and memorial poles. This is just one of several ancestral villages found throughout the islands, including SGang Gwaay (Anthony Island), Hlk’yah GawGa (Windy Bay) and T’aanuu Llnagaay (Tanu). 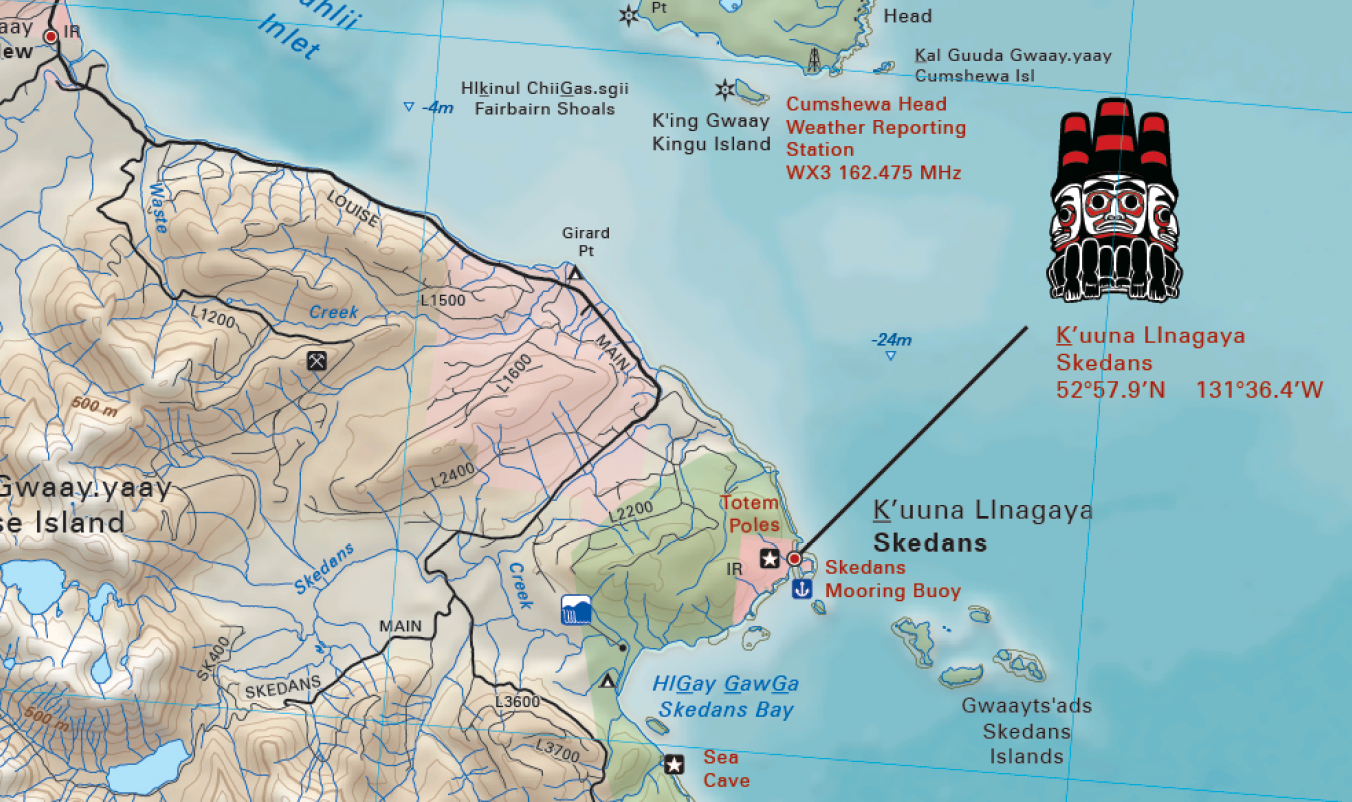 Found near Skidegate along a short and narrow gravel trail, this huge boulder sits perfectly balanced on the ocean shore. This is one of the most photographed natural phenomena on the islands, and though it appears to be teetering in a perilous balance, it is in fact completely stable. Geologists believe the rock was deposited by a retreating glacier at the end of the last Ice Age. 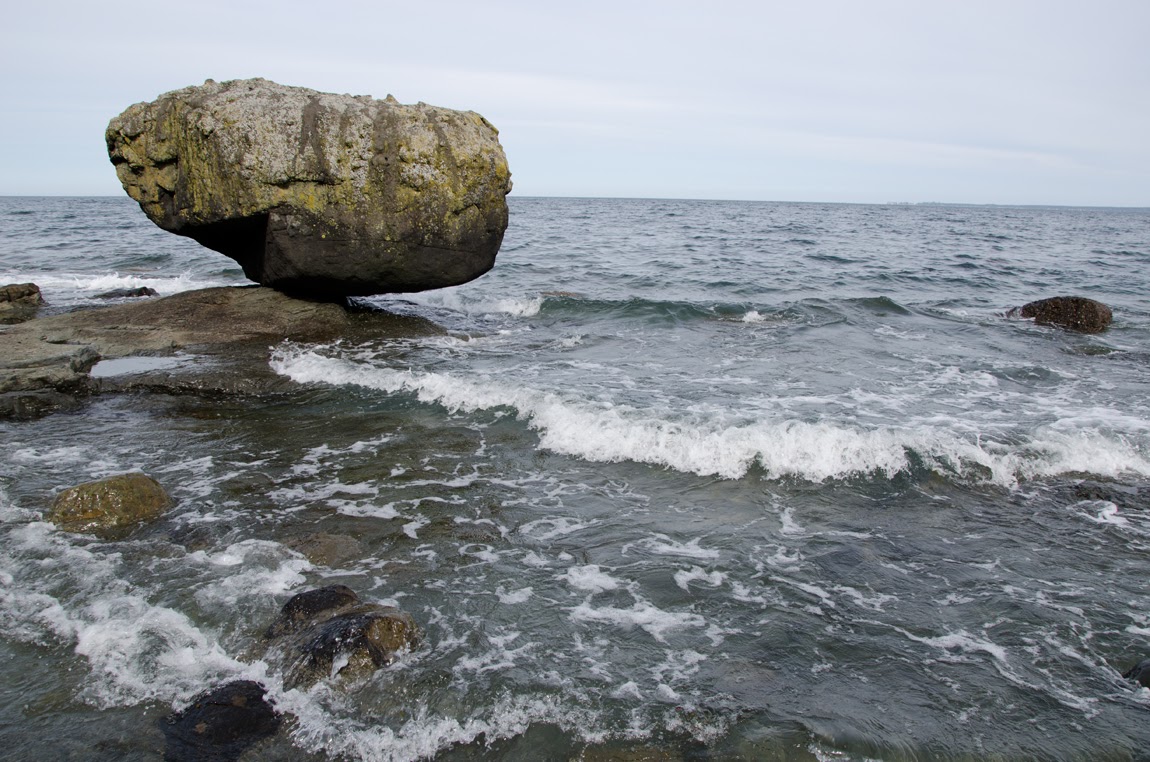 From all five species of salmon to halibut, rockfish and steelhead, Haida Gwaii boasts some of the best fishing in the entire world. This is a place where legends are made and king chinook salmon and 100 pound hali are the norm, not the exception. But with all the intricacies of ocean currents, seasonal changes and good old local knowledge, hiring a guide is your best bet for enjoying these incredible fisheries. There are numerous expert guides to choose from throughout Haida Gwaii, and you can find many of them on our Haida Gwaii Waterproof Map. 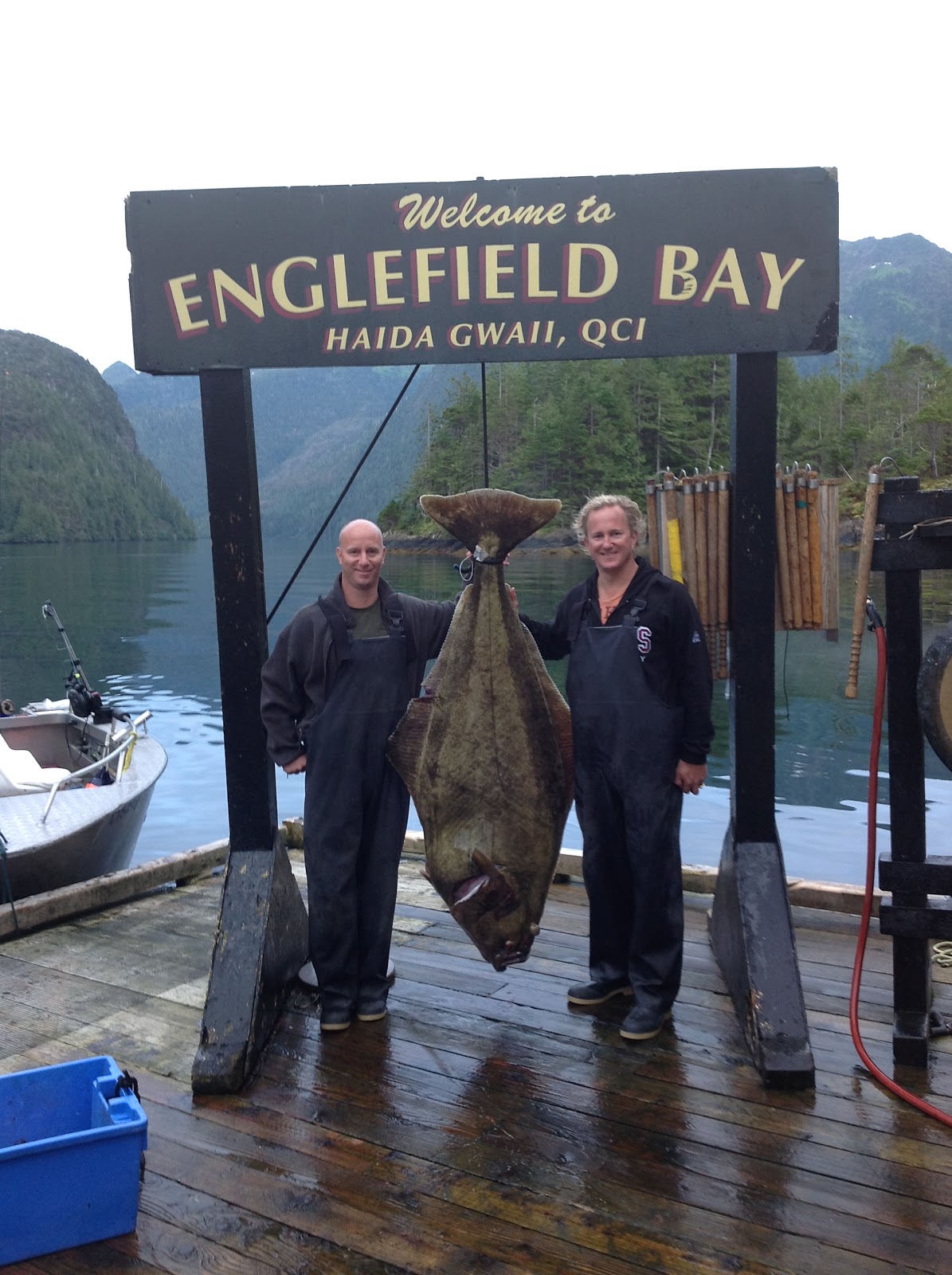 Located near Skidegate at the ancient village site of Kay Llnagaay, this is the premiere cultural centre and museum of the Haida people. The Centre was built to resemble the village that once stood here and includes an interpretive centre, performing house, canoe house, carving shed, the Bill Reid Teaching Centre, an expanded Haida Gwaii Museum and more. There are also six totem poles on site, each representing the six villages of Skidegate.

Overlooking the Hecate Strait, this rugged and beautiful bay is the perfect place for camping, picnicking, enjoying the water, hiking or beachcombing. Accessed by 21 km of well-maintained logging roads, Gray Bay is a great family destination and the ideal way to experience Haida Gwaii nature without venturing too far off the beaten path. 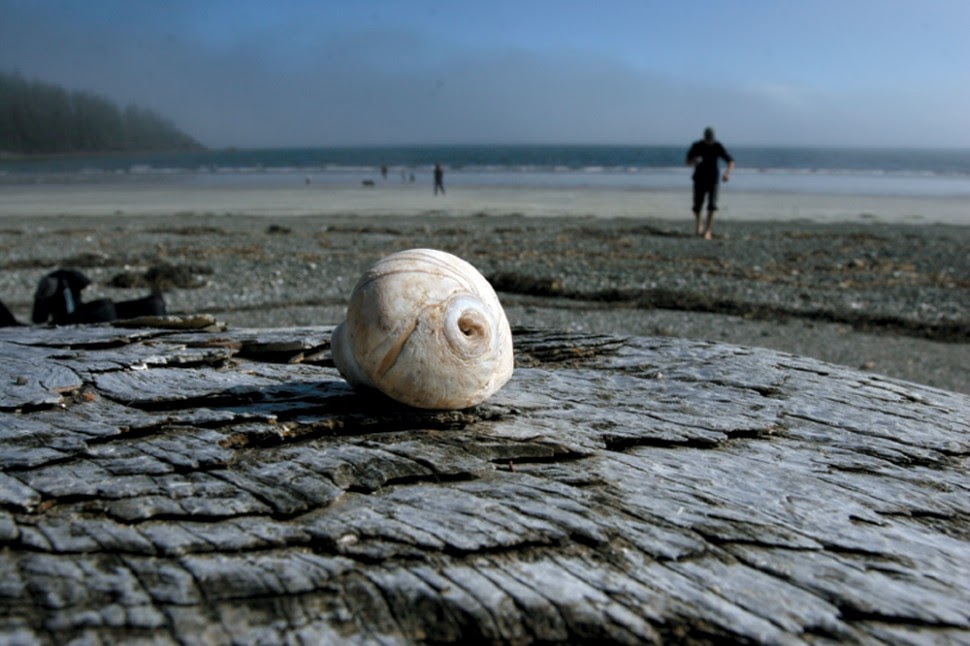 You can find all this and more in the latest edition of our Haida Gwaii Waterproof Map. More than just a map, this all-in-one outdoor adventure guide is your ultimate key to the islands from Masset to Rose Harbour and beyond. Designed for the rugged outdoor explorer, this durable, water-resistant, foldable, easy-to-read map features our state-of-the-art topographic relief and shading and a wealth of adventure information from ocean fishing hot spots to hiking trails, campsites, cultural sites and much more!

Did we miss your favourite spot in Haida Gwaii? Let us know in the comments below or share your best adventure photos with us on Instagram using #brmblife for a chance to be featured on our feed and win prizes.