PublishedJune 6, 2017
AuthorBRMB Team
CategoryGeneral Outdoor Tips   Outdoor Adventures
CommentComments Off on Are You a Bear Baiter?

On  a recent trip to New Brunswick I had the pleasure of meeting Mike Holland, The Resourceful Redneck who also happens to be a co-founder of The Canadian Wild Turkey Federation Bass Pro’s Pro-Staff speaker at the New Brunswick Sportsmen’s Show.  Mike is a seasoned hunter and has committed his life to both his sport and his love for wildlife conservation, especially when it comes to protecting wild turkey populations in Canada.

I took time out of working the Backroad Mapbooks tradeshow booth to sit in on one of Mike’s talks about effective Bear Baiting – a system of placing food consistently in one spot in the woods to bait the bear over a period of time until the hunt is complete.

As an avid camper and off-road enthusiast, I couldn’t help but draw the similarities of how hunters and campers alike bait bears. The difference is hunters are doing it for a purpose. They have paid for a license to go bear hunting in cooperation with their provincial government to enforce bear conservation, keeping an eye on numbers ensuring they are not over-hunted to extinction. Bear populations are tracked by the Provincial governments and there are only so many tags available to hunters in each region.

Inexperienced or unknowing campers most likely don’t think of the long-term outcome of their actions when it comes to storage of food and food waste while out in the bush. And this, more often than not, leads to the unnecessary death of full-grown bears and their cubs or the possibility of a human being mauled or killed.

We have most recently seen this with the recent closing of Keyhole Hotsprings in BC where campers have baited bears by leaving food and garbage behind, which has taught the bears to charge humans in the area until they drop their food and flee.

The Province of BC has shut down the area for the next two years in hopes that the bears who live there will become “untrained” to find food there. Eventually, humans may be allowed to return but if they continue to abuse the area and a bear attack happens, bears will either have to be shot, or the spot will have to be destroyed as it puts too many bears and their young at risk.

So for all of you that aren’t out there bear hunting, store your food and garbage responsibly and don’t be a bear baiter!

Before you head out to the backcountry for a picnic, a weekend or longer, make yourself familiar with what you need to do to not be a bear baiter by following the golden rules of camping.

When it comes to bear behaviour, much like other forms of wildlife, they are food motivated.

When bears wake up in the spring, they eat grass, berries, roots, insects, fish, mammals and carrion. Their mission is to eat as much as possible over the warmer months so they have adequate fat to live off of when hibernating.

Bears don’t have great eyesight but they have an incredible sense of smell, thought to be one the best out of any animal on earth, with the ability to detect animal carcasses upwind from a distance of 32 km (20 mi) away.

Usually the bears will develop a habitual path to wander along where they know they can find food. They can go to the same place each day or make a trip on a weekly basis. That’s why when hunters bait a bear, they usually have a barrel which they put the food to feed the bears knowing they will come back.

Hunters use all sorts of food to bait a bear to hunt. They bait in the same spot every year, and often use bread and baked goods like doughnuts. Mike says he uses “sweet over meat” as baked goods don’t go rotten as fast as meat, which obviously will begin to stink after a few days. So if you think that Mr. Bear is only interested in your hamburgers or hotdogs, think again.

In his lecture Mike spoke about how they ATV their bear baiting food into the forest and leave it there in the barrel. They even beat the barrel to “ring the dinner bell” to notify the bears that dinner is here! The bears actually come to associate the sound of the ATV and the beating of the barrel with food and will come back ready to feast.

Now you know how hunters bait bears, think about how someone camping with unattended food is similar.  The sound of your vehicle and voices as well as the sweet smells of the food you’re packing in, as well as all the campers who have been there before you, is signalling to the bears that have been exposed to human food that there is food in the area.

When you are camping in a Provincial Campsite, Rec Site or even just a frequently visited backcountry spot, it is important to store your food and food waste in a container that will mask scents and will keep your food secure, and to pack out what you pack in. It is also important not to leave used plates, cups or cutlery to sit while you go for a jaunt to the lake. Every scent you leave behind is an invitation to picnic with the bears.

That is why it is so important that while you are camping you do not leave your food unattended on or under picnic tables. Not just because you will lose your food, but because you are potentially setting up other campers to be attacked or a bear to be killed. If you are tenting, throw your food in your vehicle or place your food into a bear bag and use a rope to raise it into a tree.

Use the Bear Bag / Tree Method to Secure your Food: 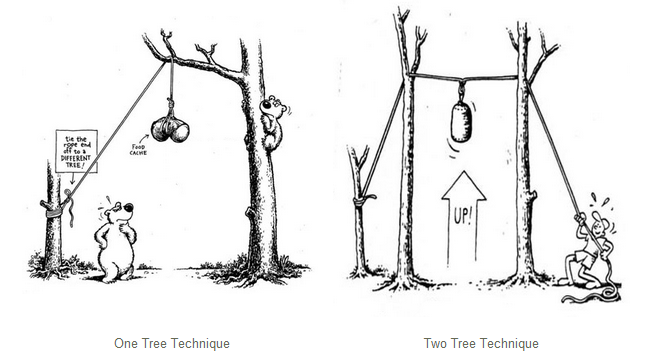 Use the Vehicle Method to Secure your Food:

Pack out what you pack in

In fact, Mike says he uses Kool Aid at times to bait bears because the sweet smell is so pungent the bears can smell it for miles. Makes you wonder what the bears think of that nice sweet cold beverage you’re drinking, doesn’t it?

While you’re at it, make sure you pack out all your camping gear (yes even if it’s broken) and all of your food, even if it spoils in the sun. It may be a pungent drive to the next garbage receptacle but you can feel good about doing your part to stop dumping garbage in nature, the unnecessary killings of bears and keeping yourself and your fellow campers and backcountry enthusiasts safe.

Be safe out there!