Winter has a varied effect on Canada’s furry and feathered residents. While some animals, such as bears, prefer to sleep it out and skip the season entirely, others, such as foxes and lynx thrive in the snowy wilderness. Birds, including owls and eagles, can be found throughout the country despite the cold, as can small mammals like otters and martens. In some cases, winter actually brings the animals closer to civilization as they descend from the mountains to feed or to find a mate. From BC to Newfoundland, the country is full of wonderful winter wildlife viewing adventures. Here are a few places we recommend checking out:

Nestled in British Columbia’s Coast Mountains, the Squamish River Valley is known as one of the continent’s most important wintering areas for bald eagles. From December to February, thousands of eagles come here to spend the winter and feed on the spawning salmon. In the 90s, this was even the site of a world record bald eagle count, at 3,769 birds. Designated viewing facilities have been set up for visitors, and all the conveniences of the big city are just a short drive away. If you are travelling the Sea to Sky Highway, be sure to stop at Brackendale Eagles Provincial Park for an unforgettable winter wildlife viewing experience. 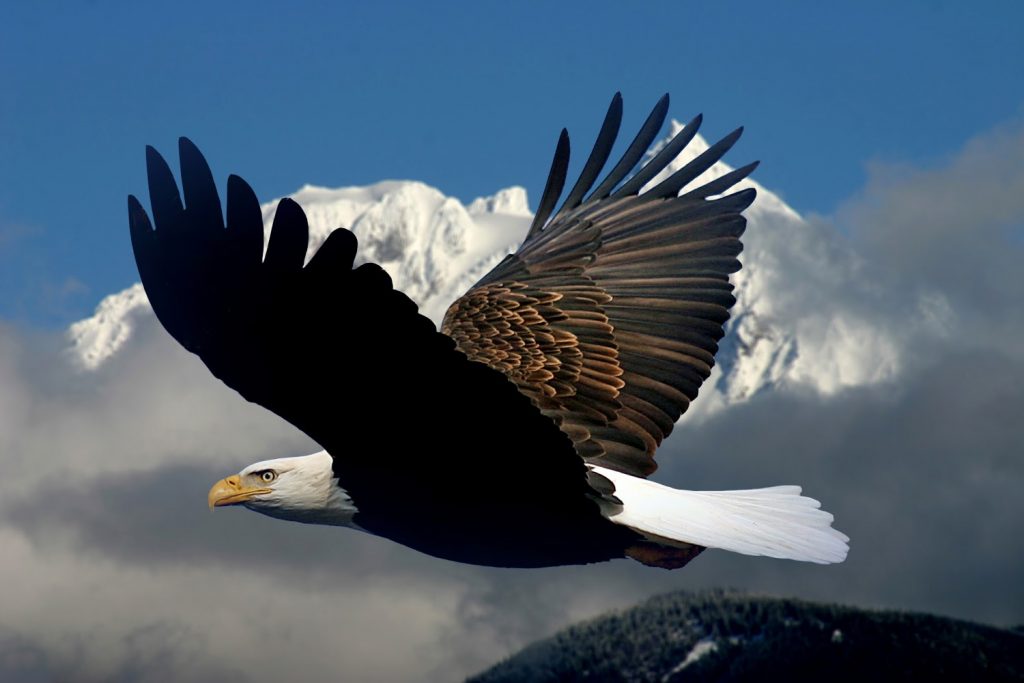 This small village at the intersection of the Haines and Alaska Highways is a hot spot for Dall sheep viewing. From late August to May, the sheep winter in the area, and there is a viewing area with telescopes found about an hour north of town. The sheep are excellent climbers and thrive in steep, rocky terrain that keeps them safe from most predators. They prefer windy slopes that have had the snow blown off them, exposing the dry grass and sedge stems that make up their winter diet. While taking a look for these highly specialized creatures, keep an eye out for golden eagles as well. 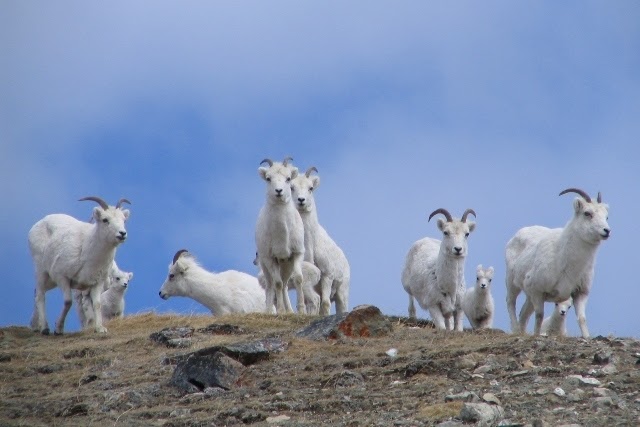 Set among the world-famous Rocky Mountains, Banff can be quite busy during the peak tourist season. For wildlife viewers, winter is actually the best time to visit, since the crowds are thinner and many animal species are easier to spot as they move down from the mountains to feed or perform mating rituals. Deer and elk are a common sight, and can often be seen right in the Banff townsite. Bighorn sheep descend into the valleys as well, and if you will often hear the thunderous crash of their butting heads as rams challenge each other for mating rights. 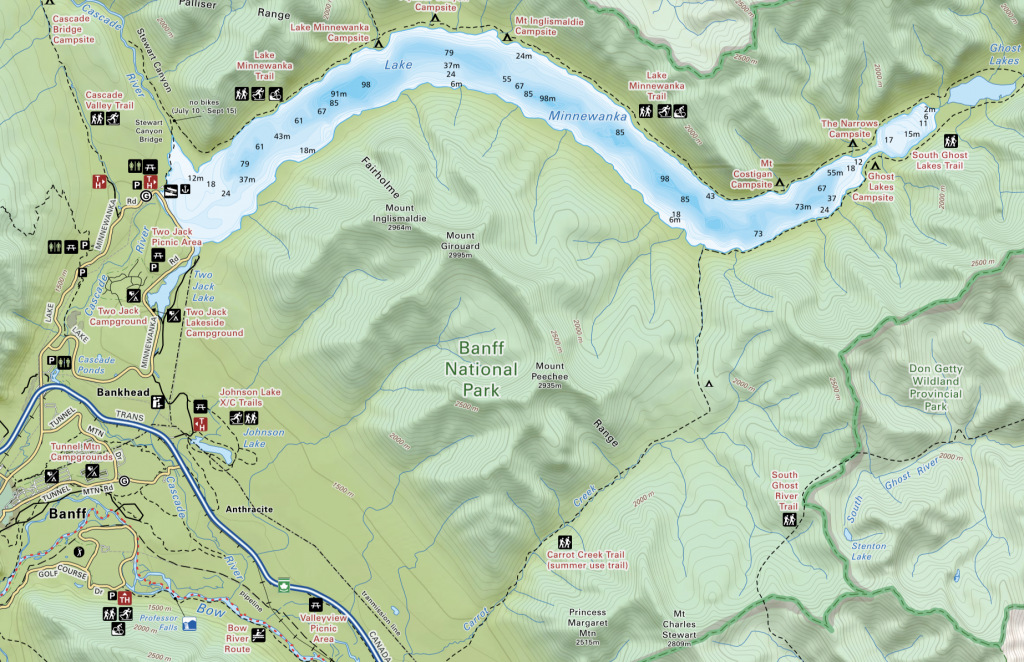 Typically found in the far north, snowy owls move south into the prairies in the winter. These magnificent birds can be found throughout rural Alberta, often just a short drive from the big city. Snowy owls are the second largest owl in Canada, behind the grey owl, and can often be spotted atop fenceposts or telephone poles. They feed on small rodents and are very skilled hunters – seeing them pounce on their prey is an unforgettable experience. From atop their perch, they survey the surrounding landscape with a 270° range of neck motion, then swoop down to catch their lunch once the opportunity arises. One of the most impressive birds you can find anywhere, snowy owls are well worth a bit of backroad exploring to find. 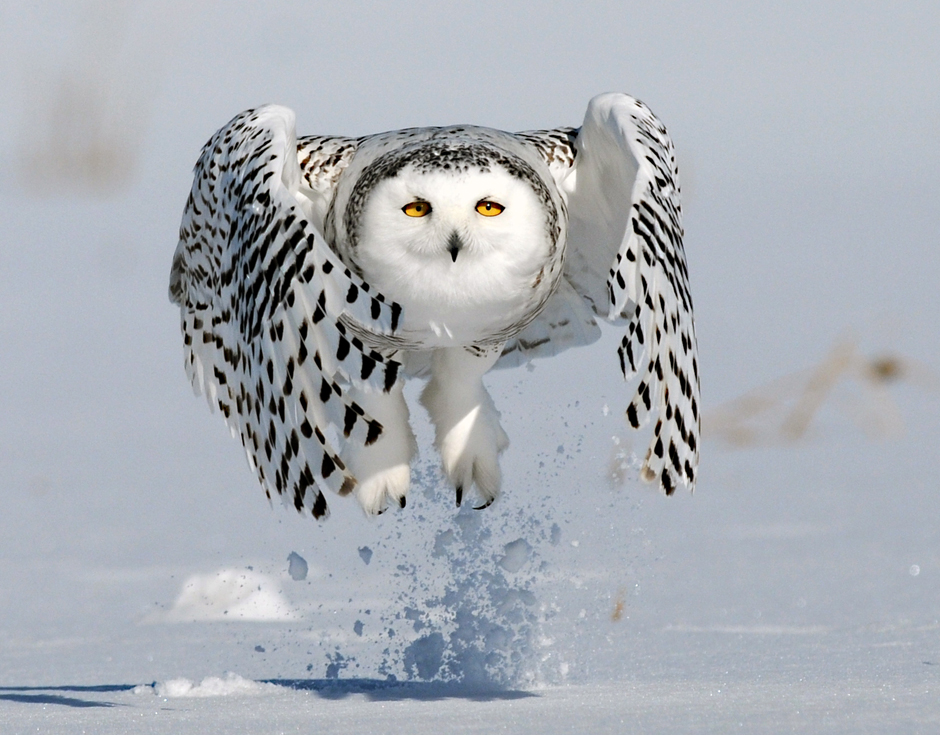 Occupying 3,874 km2 (1,496 mi2) of Central Saskatchewan wilderness, Prince Albert National Park has a lot of room for wild critters to roam. In the winter, elk, white-tailed deer and red fox can all be seen here and, if you are lucky, so can the wolves who stalk them. Smaller mammals like otters, weasels and snowshoe hares all remain active through the winter months as well, along with rodents such as voles, who burrow into holes in the snow. Birders should be sure to bring their binoculars to the park, as there are over 20 species of birds that winter here including black-capped chickadees, gray jays and woodpeckers. These birds can actually be easier to spot in winter, when the trees are free of leaves. Whether you are looking for wildlife from the comfort of your vehicle or are exploring the park’s cross-country ski and snowshoe trails, Prince Albert National Park is as good as a winter wildlife viewing adventure can get. 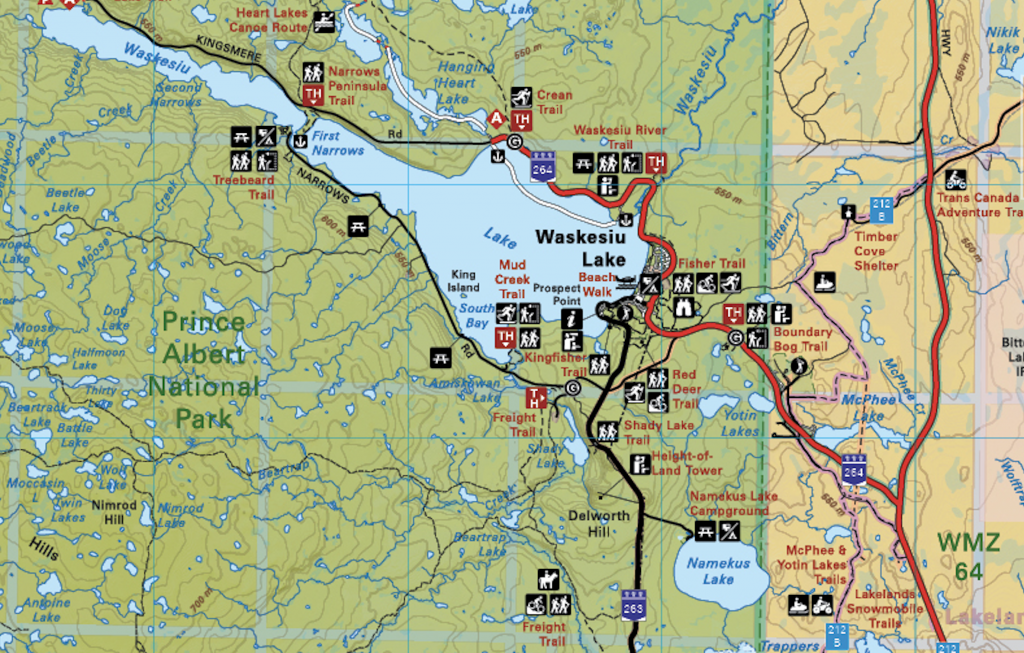 Standing in stark contrast to the surrounding farmlands, Riding Mountain National Park protects a convergence of three distinct ecosystems (grassland, upland boreal forest and eastern deciduous forest), creating a vibrant habitat for wildlife of all kinds. In the winter, you can often spot the park’s wild residents right along the road, including moose, wolves, lynx, elk and foxes. Looking overhead, you are likely to catch a glimpse of a raven or great gray owl, who are one of the few owls that hunt during the daytime. And in the many streams that run through the park you can often spot an otter or two, who have recently been reintroduced to the area. From birds to mammals big and small, Riding Mountain National Park has it all. 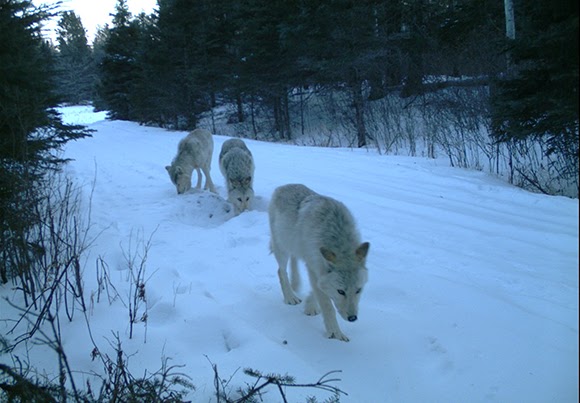 While it is probably best known for its world-class paddling opportunities during the ice-free months, Algonquin Park is a wonderful winter destination as well. An elaborate cross-country ski and snowshoe trail system stretches throughout the park, leading you through plenty of active wildlife habitat. Deer, fishers, foxes, martens, moose, otters and wolves all prowl the park, but it is the birds that are the star of the show here. Bohemian waxwings, boreal chickadees, black-backed woodpeckers, gray jays, spruce grouse and many other species can all be seen throughout the winter. The park even offers an online birding report so you can see exactly which species are currently active. If you find yourself passing through Ontario this winter, be sure to stop and see the wildlife at Algonquin Provincial Park. 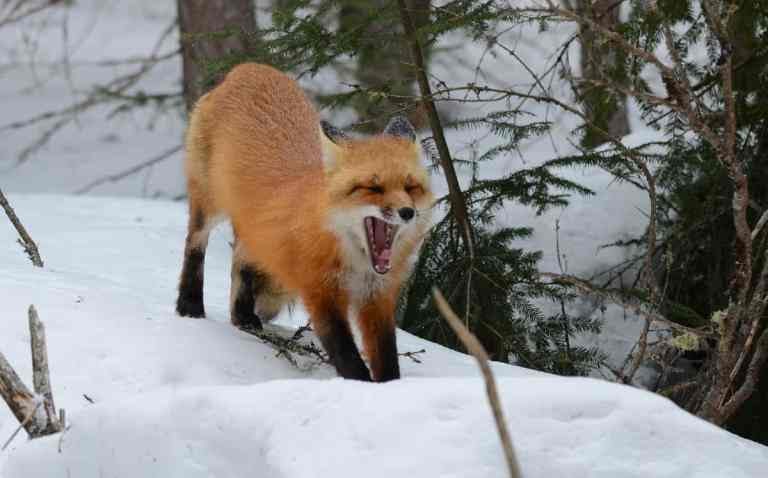 Newfoundland is home to one of the healthiest populations of woodland caribou in North America, with an estimated 40,000 animals found across the Island, and the Bay du Nord Wilderness Reserve is a great place to look for them. The reserve contains the province’s largest protected river system, creating abundant habitat for these majestic beasts. In fact, the Island’s biggest herd of caribou, the Middle Range caribou herd, uses the reserve as a wintering ground. With no marked trails or facilities of any kind, the reserve offers an authentic wilderness experience and some of the best winter wildlife viewing in the country. 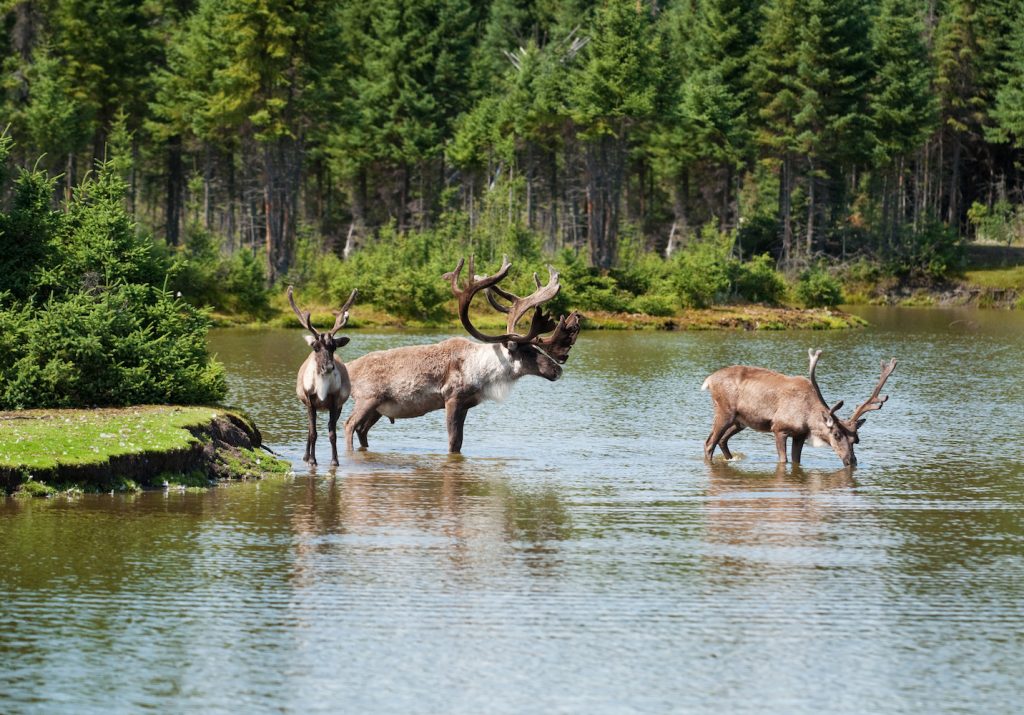 Sandwiched between the cities of Halifax and Dartmouth, Halifax Harbour remains ice-free in the winter, attracting a variety of birds including black-headed and Iceland gulls, aclids and sea ducks. In the shrubbery and parkland that surrounds the harbour, cardinals, orioles and warblers can be seen. The Nova Scotia Bird Society and the Halifax Field Naturalists both run guided birding tours throughout the winter, offering a unique winter wildlife viewing adventure so close to a major city. 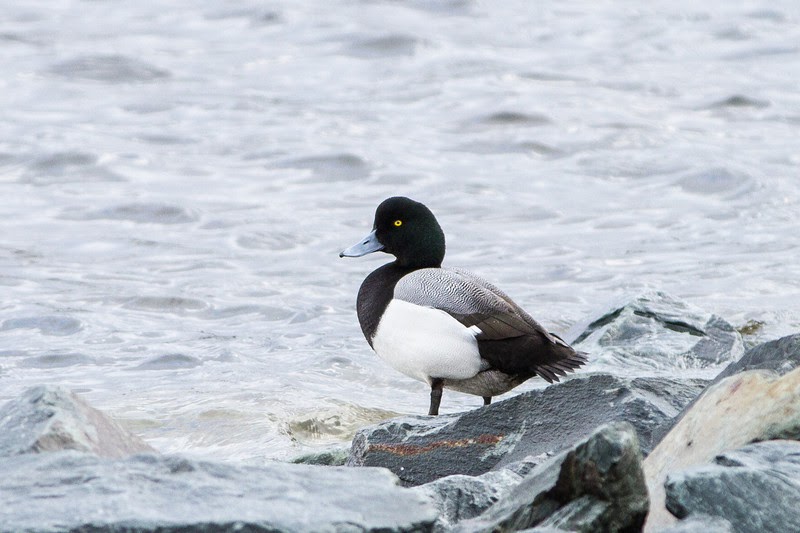 A great resource for finding wildlife viewing areas across Canada are our Backroad Mapbooks and GPS Maps. In addition to our industry-leading maps, we offer detailed descriptions of wildlife viewing hot spots including directions, species, best time of year to visit and more.

Did we miss your favourite winter wildlife viewing area? Let us know in the comments below or share your own wildlife adventures with us on Instagram using #brmblife for a chance to be featured on our feed and win prizes.