Canada’s north is a sprawling, wild region where wild animals often outnumber humans outside of major communities. The area’s abundant animal population has been sustaining the Inuit people for thousands of years, with hunting playing an integral role in their day-to-day lives. Animals such as polar bear, caribou and muskoxen are emblematic of the Northern territories, and for visiting hunters offer the opportunity for the big game hunt of a lifetime. To get you acquainted with some of the area’s most notable hunting opportunities, here are our Top Picks for Northern Canada’s most exciting hunts.

Bison were initially introduced to the Yukon in the 1980s and from an initial population of 170, these animals’ numbers have grown to close 1,500. In order to manage this growing population, bison hunting is actively encouraged by the government. Bison tags are easy to get and there are both fall and winter hunting seasons. 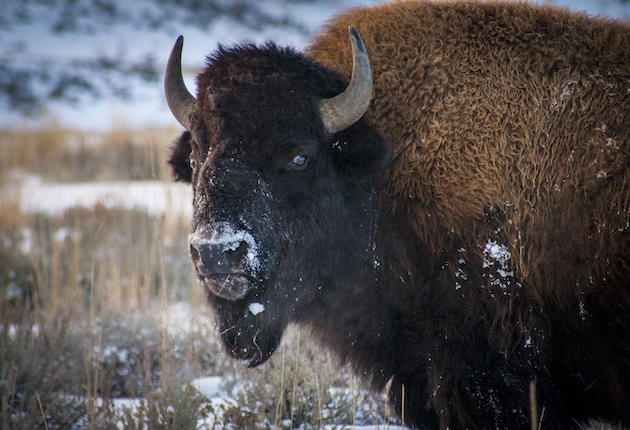 The typical bison bull can weigh over 1,000 kg (2,200 lb), although most of this weight consists of the head and viscera. However, you can still harvest up to 300 kg of meat from a bison this size. Bison cows typically weigh about two thirds of that, and hunters in the Yukon are encouraged to target females in order to keep bison numbers under control. Hunters need to be aware that bison are hard to kill, requiring a clean shot at close range to the heart and lung area.

The Yukon moose is legendary among antlered game hunters, standing up to 2 metres (7 ft) tall and boasting antler spread of up to 180 cm (70 in). There are on average between 100 and 250 moose for every 1,000 km2 (385 mi2) in the Yukon, with habitat ranging valley bottoms, rivers and swamps to high alpine willow draws. Although this population is not as dense as in other parts of the continent, the average size of these animals more than makes up for it. 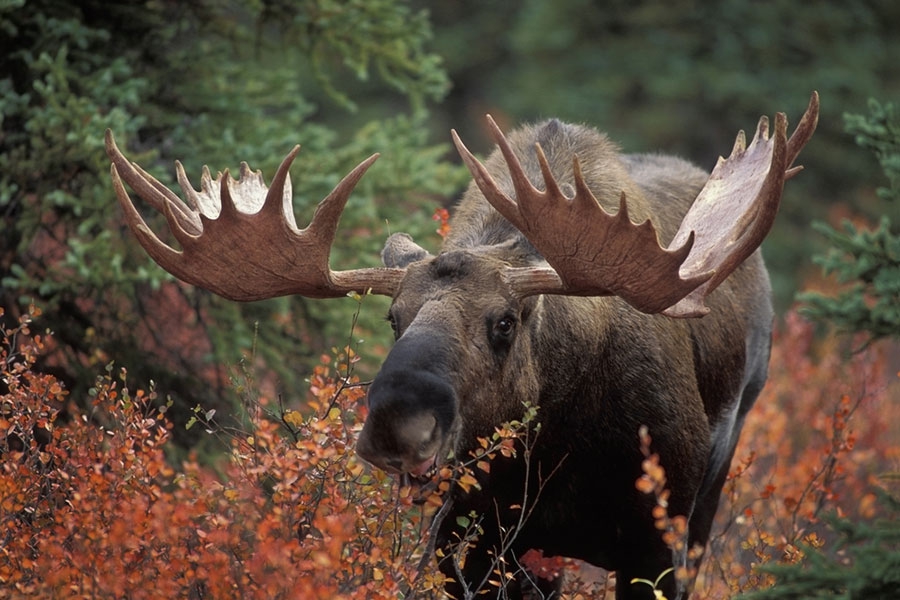 Most moose hunts in the Yukon are done in traditional horseback/packhorse style, often venturing deep into the wilderness, while river float trip hunting is also a productive means to bag one of these animals. This also allows you to sample some of the Yukon’s incredible fishing while cruising the river into moose territory. The hunts are often based from a cabin, and as with other big game hunts in the north, a professional outfitter is crucial to a Yukon moose hut. There are few hunting experiences as exciting as seeing a rutting bull moving through the bush within rifle range.

Muskoxen are large, magnificent animals, noted for their long, curved horns, musky smell and shaggy coat, with hair that reaches half a metre in length and often hangs almost to the ground. The wool of the muskox has long been prized by locals for its softness and insulating quality. These are ancient animals, having migrated to the Northwest Territories around 150,000 years ago alongside the now-extinct mammoth. They live in herds of 10 to 20 and can be found on the mainland from the Arctic Coast all the way to Artillery Lake, as well as on Banks, Eglinton, Melville and Victoria Islands. 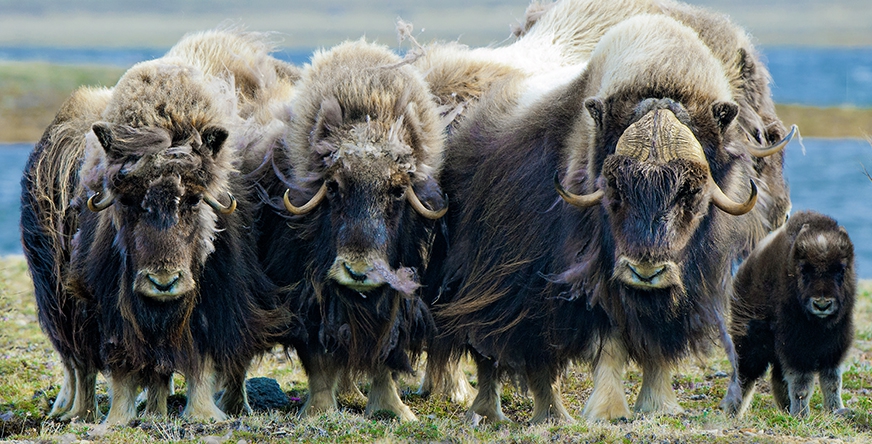 In the Northwest Territories, muskoxen are hunted on a quota system for both resident and non-resident hunters. The hunting season typically opens in mid-August and lasts until the following spring. Canada is home to about 75% of the world’s muskoxen population, and with the population remaining stable, the success rate is very high for hunters willing to brave the extreme arctic conditions and venture into muskoxen territory. 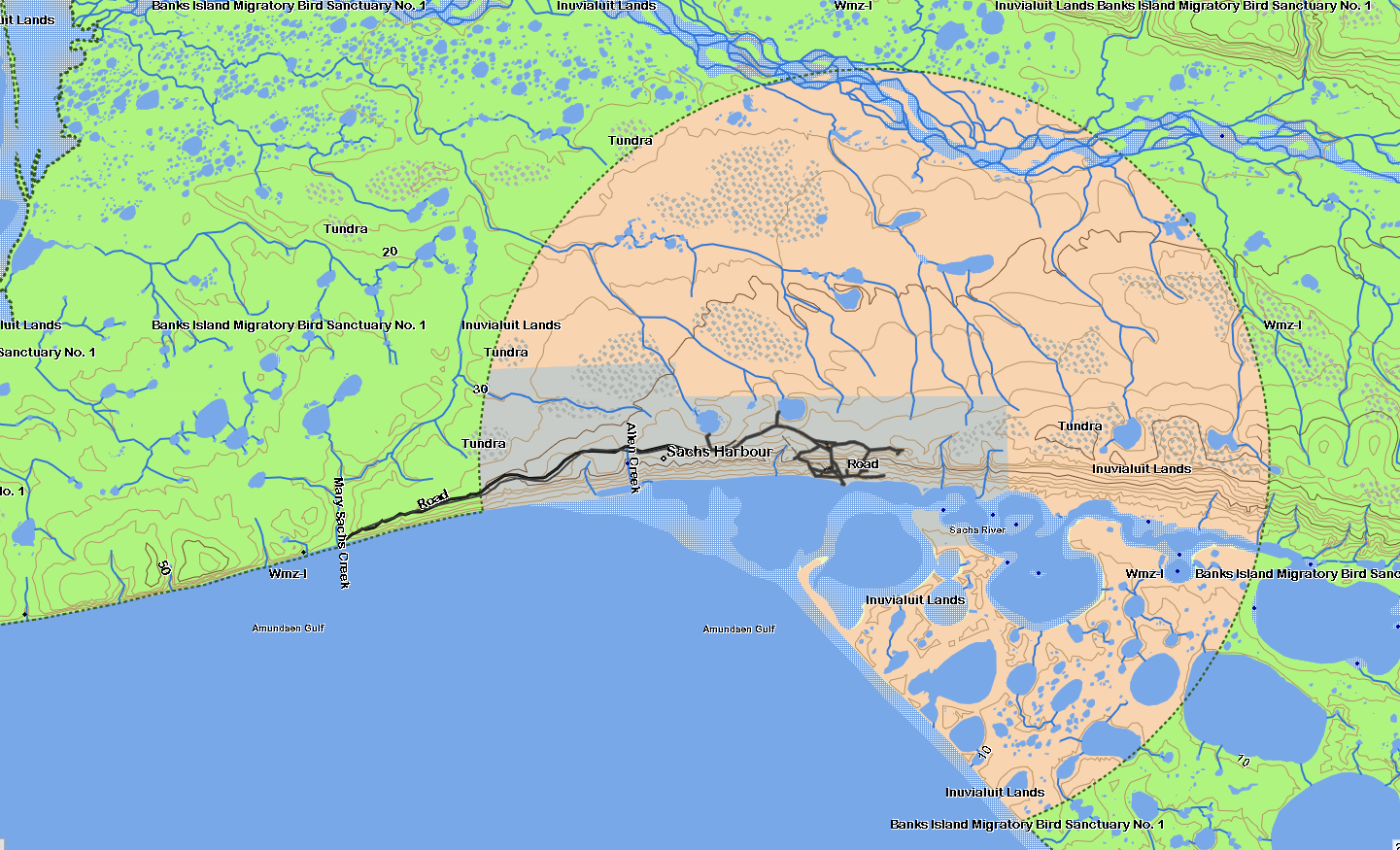 Dall’s sheep are nimble and elusive creatures, often found on steep mountainsides where they feed on grasses and sedges out of the range of predators. Adult rams can weigh up to 100 kg (220 lb), and both rams and ewes sport a distinct pair of curved horns. In the Northwest Territories, most hunting for Dall’s Sheep occurs in the Mackenzie Mountains, but there is also a concentration of the animals further north in the Richardson Mountains. The animals can often be found in groups of three to ten individuals. 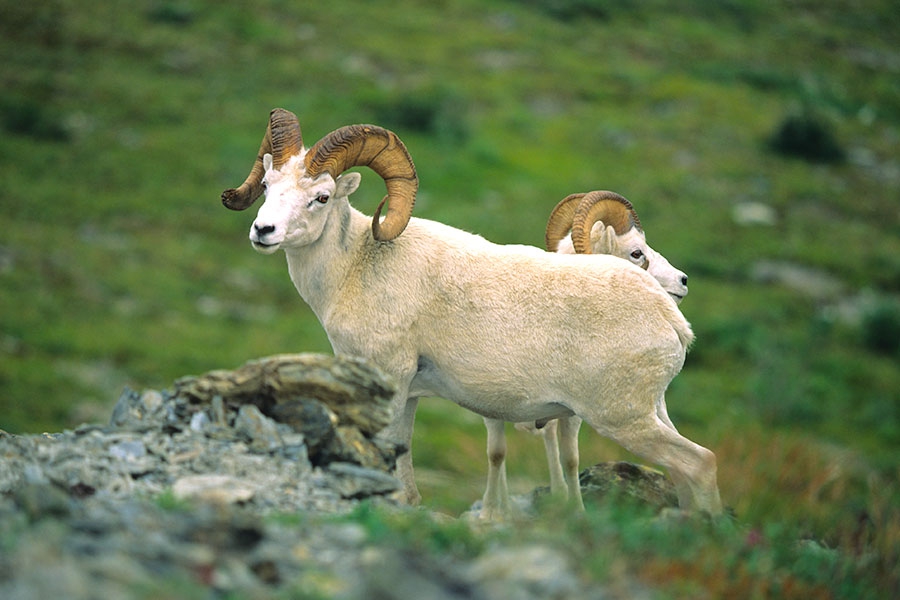 A hunt for Dall’s sheep usually consist of a helicopter flight into a basecamp, followed by a hike or horseback ride into sheep territory. The hunting season lasts from July 15th to October 31st, with a limit of one adult male sheep per hunter. And with the help of a local outfitter, your chances of success are quite high, provided you don’t mind the grunt in to these majestic animals’ mountainous range. 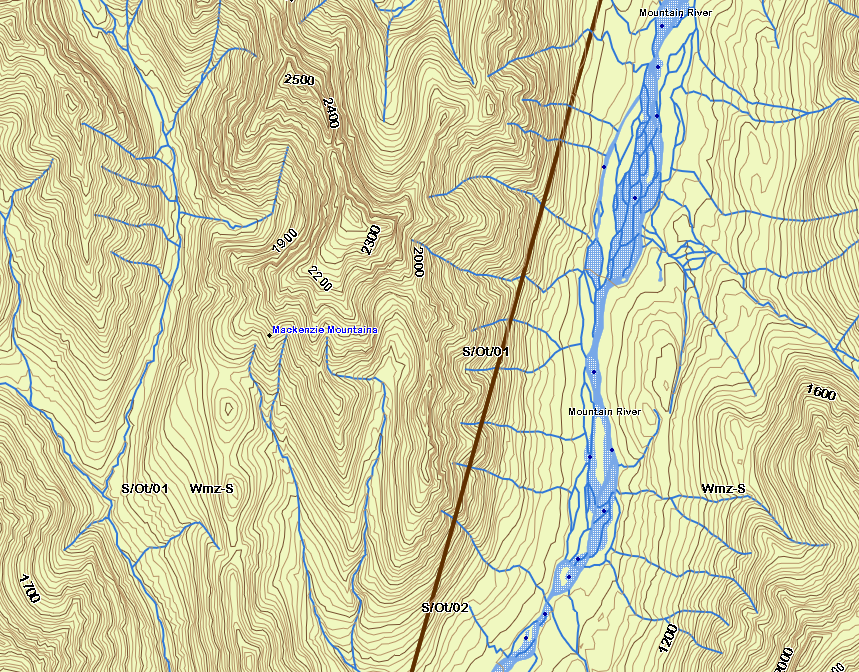 Polar bears are the largest land-dwelling carnivore species on the planet and are known to be a very intelligent animal, making them dangerous predators to say the least. Adult males can grow up to 3 metres (10 ft) in height and reach 720 kg (1,590 lb) in weight. They are excellent swimmers, travelling great distances in search of food, with seals being a particular favourite. A polar bear’s preferred hunting method is still-hunting – the bear will position itself next to the air-hole of a seal and use its excellent sense of smell to detect the animal, reaching into the hole and dragging the seal onto the ice. 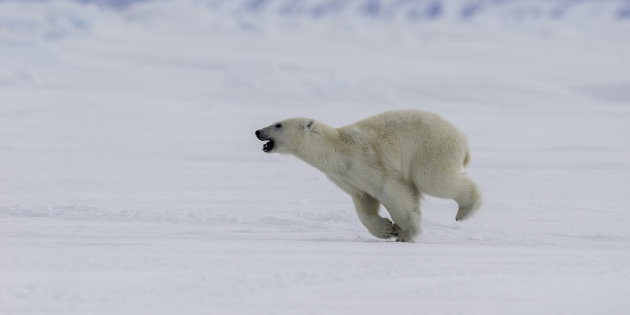 In Nunavut, some 450-500 polar bears are harvested each year, more than in the rest of the world combined. Non-residents must purchase a sport hunting tag and hire a local guide to hunt these beasts, making polar bear hunting an important source of revenue for many northern communities. The hunt is conducted using traditional methods, including the use of dog teams for transportation.

Nunavut is home to more than 750,000 caribou, with the barren-ground subspecies particularly prized among hunters. The Inuit have been harvesting these animals since the stone age, using the caribou not just for food but for clothing, shelter and tools as well. Caribou are migratory animals and are almost always on the move, with some herds travelling as far as 1,200 km (745 mi) from one seasonal pasture to the next. 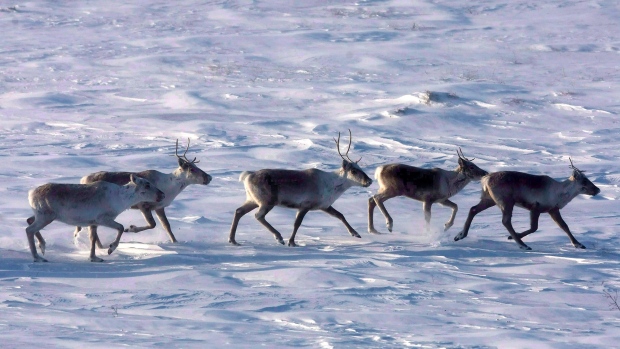 Caribou can be found throughout the mainland in the Kivalliq and Kitikmeot regions as well as on Baffin Island, although a moratorium was placed on caribou hunting on the island in 2016. On the mainland, hunting remains good and there are numerous outfitters and local guides that can assure visitors a successful hunt. The communities of Arviat, Cambridge Bay, Gjoa Haven, Kimmirut, Repulse Bay and Whale Cove are all great places to base a caribou hunt from. 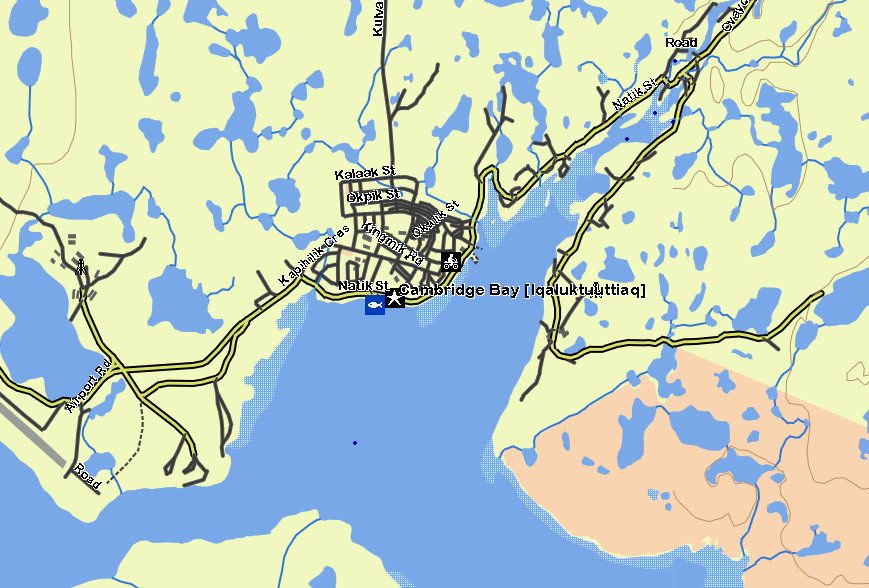 To help you have the most productive hunt possible in Canada’s northern territories, be sure to pick up a copy of our Northern Canada GPS Maps. Covering all of the Yukon, Northwest Territories and Nunavut, these are the most detailed topographic maps for the area available anywhere.

Did you know we are currently holding our 25th Anniversary Hunting Adventures Contest? We’ve partnered up with YETI to give away three prize packs with a combined value of over $3,000! Simply click the link below to enter. 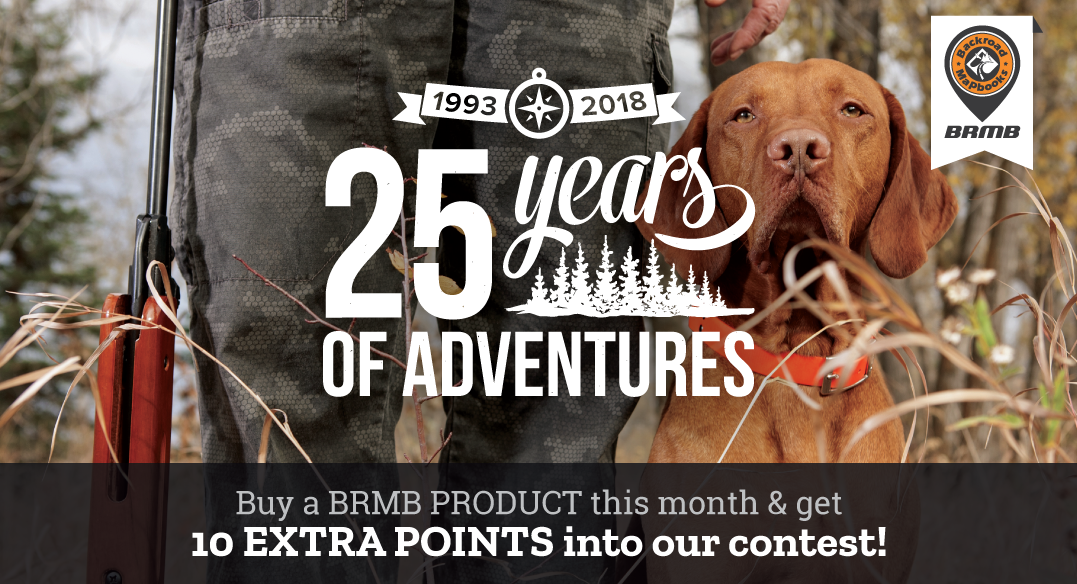