Found to the east of the small, gold-rush era towns of Wells and Barkerville, the Bowron Lakes offer a legendary canoe trip that, while celebrated among paddlers, can be quite daunting to those not used to extended lake travel. Covering 118 km (73 mi), including 10 km (6.2 mi) of portages, the circuit can test the mettle of any outdoors person. Boiling whitewater on the river sections, unpredictable weather and the logistics of packing food and supplies for a multi-day trip only add to the challenge. But the idyllic natural setting and amazing scenery that seems to change at each corner of the circuit make the trip more than worth it.

The difficulties of such a trip did not intimidate Wes and Russ Mussio, the founders of Backroad Mapbooks, who like to plan an epic trip or two each year. From exploring the wild coastline of Haida Gwaii to conquering the imposing slopes of Mount Kilimanjaro, the brothers have just about done it all, and this year their sights were set on the Bowron Lake Canoe Circuit. Joining them on the trip was their friend Scott Schoen, nephew Brandon Butlin and BRMB staff members Andrew Allen and David Mancini. Together, the crew decided to paddle the looping circuit in five days, despite BC Parks’ recommendation of taking six to eight. 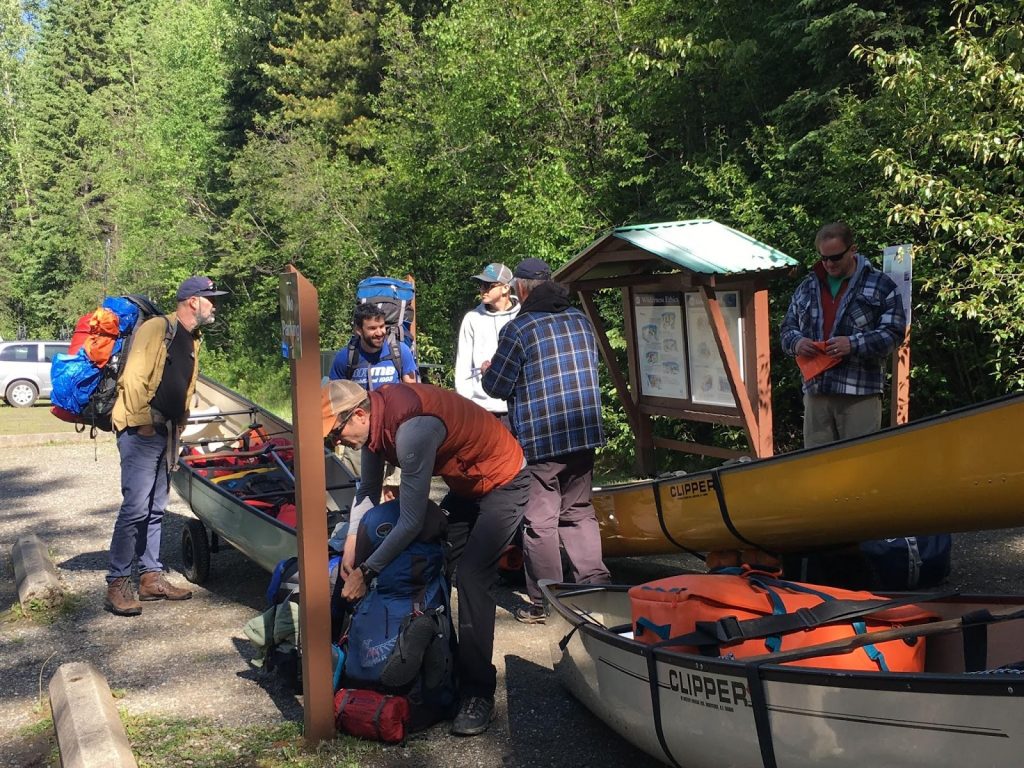 To help get an early start on their first day of paddling and ensure they made it to the mandatory canoe route orientation in the morning, the group enjoyed the creature comforts of a cozy night at Becker’s Lodge. The next day started with repacking and the orientation, where they were warned about bears and treacherous river conditions (a previous group had lost their canoe in the whitewater and barely gotten out alive). Next it was weigh-in time, since trippers are not allowed to have more than 60 lb (27 kg) of gear in their canoe during portages. Despite sneaking in a few (or several) adult beverages and extra gear, they were cleared for departure.

The trip began with a series of three gruelling portages, all of which seemed to climb more than they descended. With fully loaded canoes, marshy trails and swarms of vicious mosquitoes out for blood, the trip was off to a difficult start. Forced to travel beyond their planned campsite due to the relentless insects, the crew made it to the West Arm of Isaac Lake towards the end of the day, and even caught some fish along the way. This would help augment the dehydrated pre-packed meals they had brought with them, affectionately referred to as “bags of s–t.” With a nice fish dinner next to a crackling fire and a few of the aforementioned adult beverages to help them unwind, the first day was a wrap. 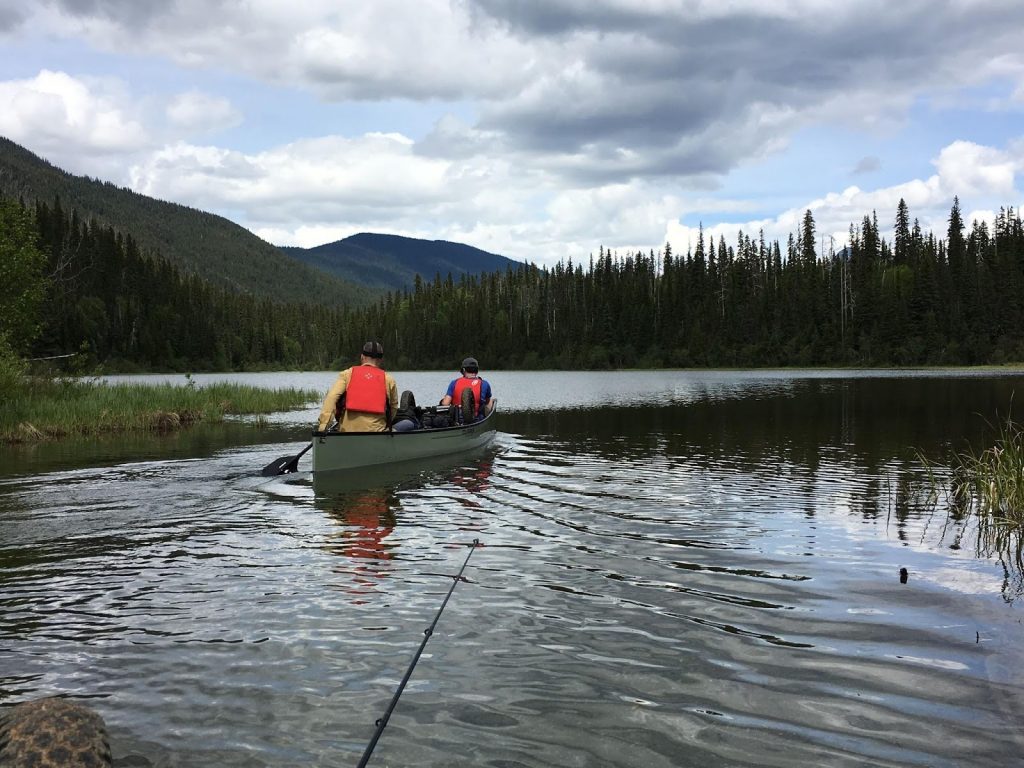 With a steady rain delaying the next morning’s departure, the crew set out late but found much success fishing on Isaac Lake, reeling in over a dozen 2.3+ kg (5+ lb) fish between the two canoes, plus a 4.5 kg (10 lb) rainbow and an even bigger fish that stripped the line right off Wes’ reel. The Bowron Lakes circuit offers a number of cabins for emergency use along its route, and the group enjoyed waiting out the rain in one of these as they had their lunch. But after continuing on, catching a few more fish and beginning to set up camp, the rain came back, making everyone glad they brought tarps and extra clothes despite the extra weight and space they took up. 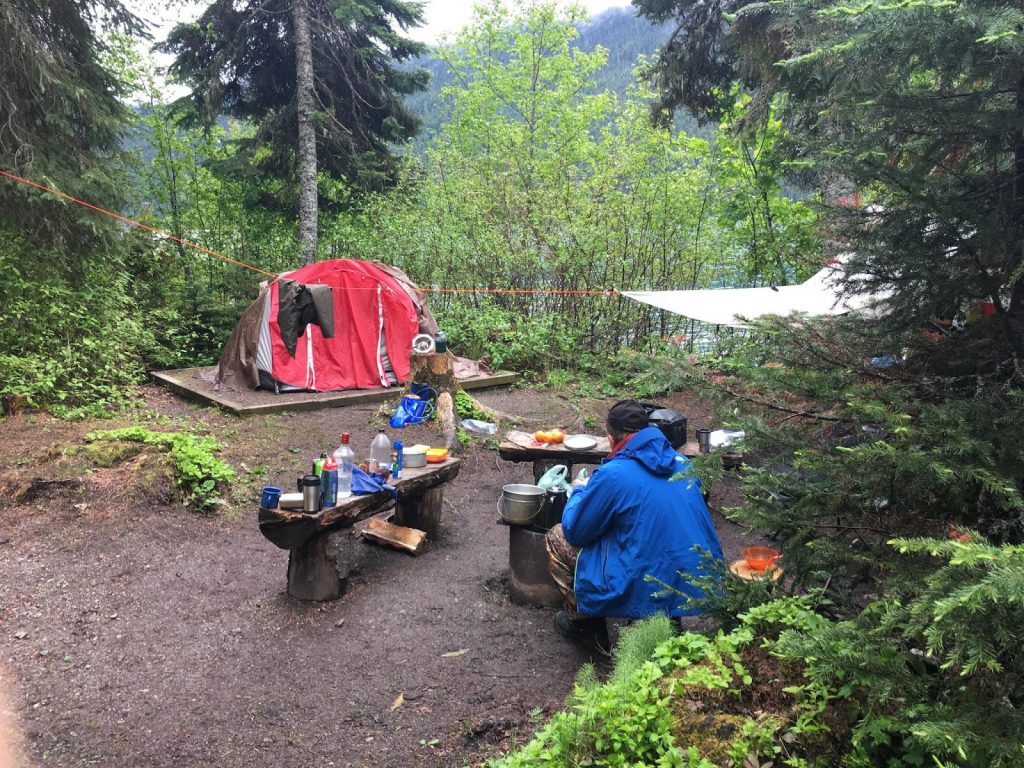 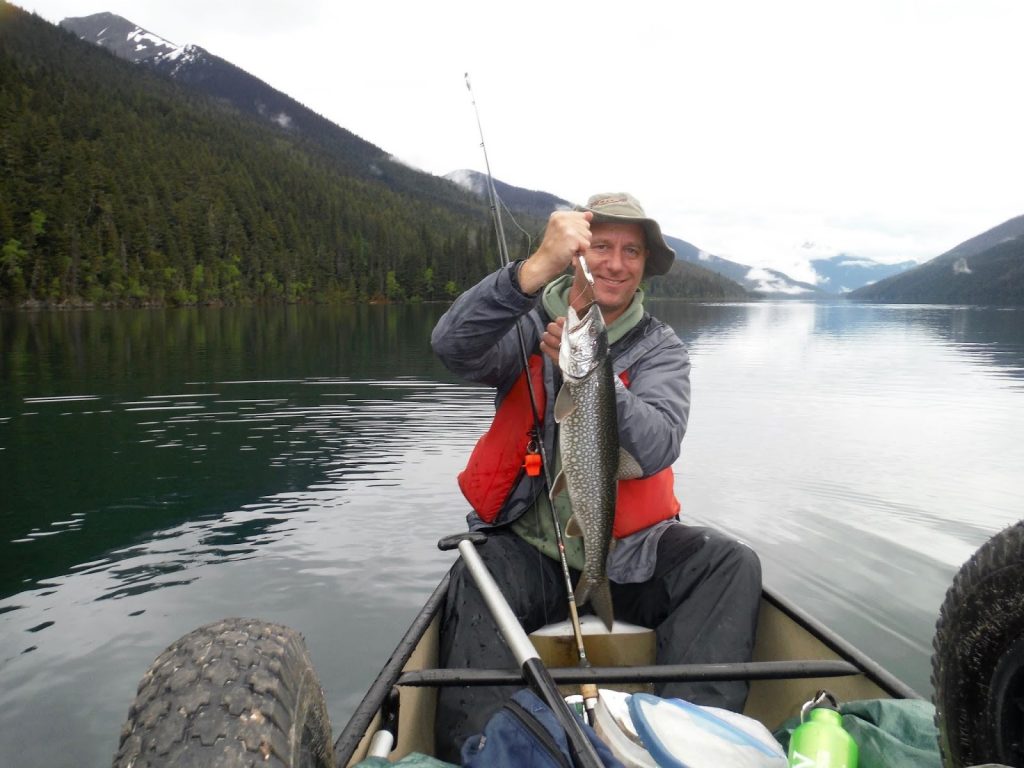 Isaac Lake is 38 km (23 mi) long, and the flat water the group experienced on their paddle was truly a blessing. As they approached the whitewater of the Isaac River on their third day, the group decided to run it, despite the earlier reports of a group capsizing at this spot – the thought of portaging was just too unappealing. Luckily, all three canoes breezed through to the mandatory take-out above Isaac Falls, and the adrenaline rush of conquering these challenging rapids had everyone smiling. Below the falls, the river is much calmer, and as the sun broke out the crew was able to enjoy the spectacular mountain scenery for which the route is famous. The Isaac eventually joins with the silt-laden Cariboo River and at this point the current picks up its pace, but the crew did not have much trouble following the river to Lanezi Lake, though the last 5 km of still water travel had them virtually falling out of their canoes upon reaching their campsite at Turner Creek. A shimmering sandy beach, more mountain views, a three-quarter moon and more freshly caught trout wrapped up the third day of the Bowron adventure. 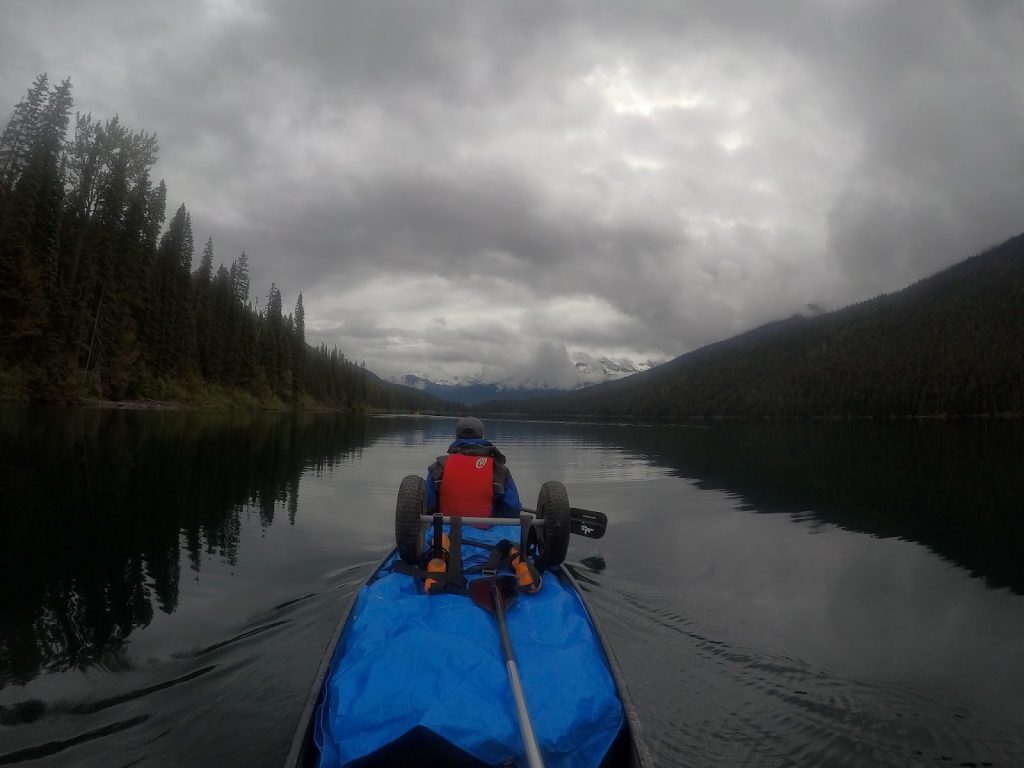 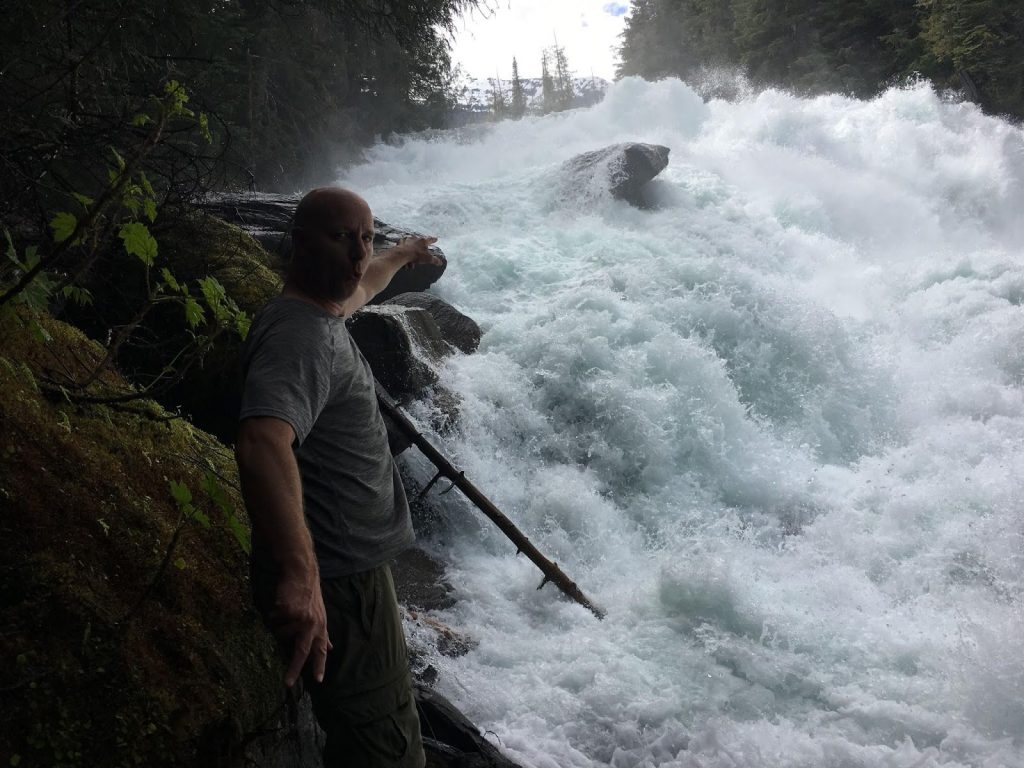 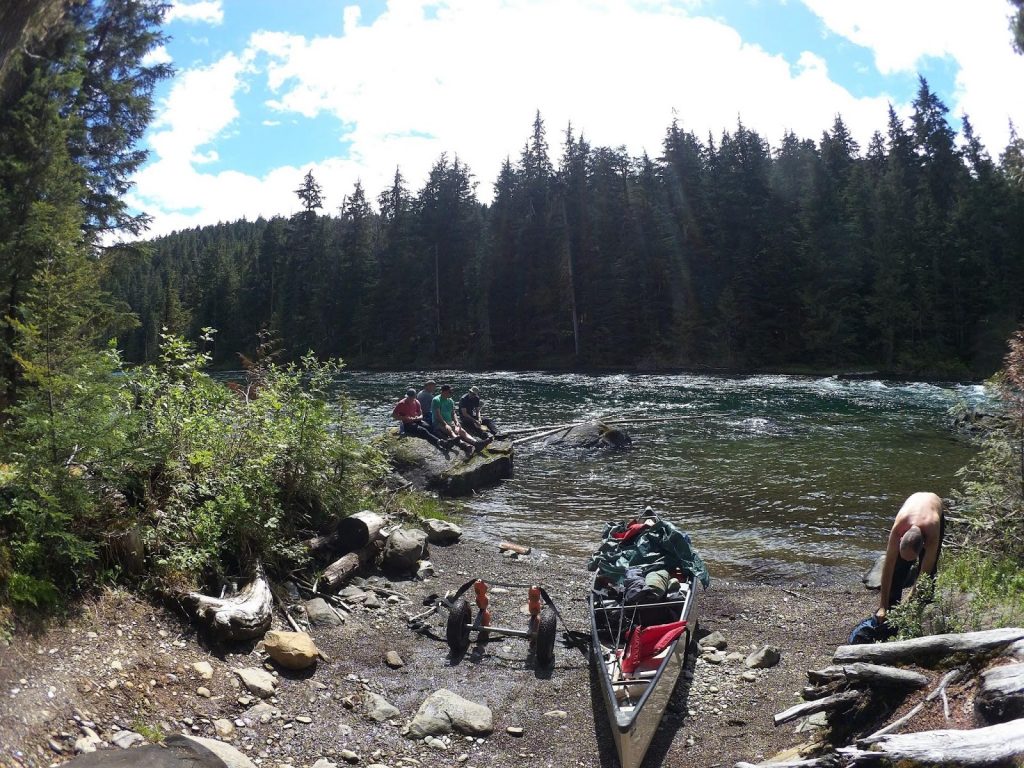 Continuing on along the flat water of the mountain-flanked Lanezi Lake on the fourth day, the canoeists proceeded through Sandy Lake and on to Unna Lake, where a short side trip to view Cariboo Falls was in order. It is a fairly easy 1.4 km hike to the 24 metre (80 ft) high falls, which were especially impressive during the high water of June. And while many of the lakes on the circuit were ice-cold, a post-hike dip in Unna Lake revealed surprisingly warm waters. Returning to the main route, the crew was once again accosted by clouds of mosquitoes, compelling them to make haste to their campsite on Spectacle Lake. The wind picked up just as they landed, blowing the bugs away and allowing for a nice view of a powerful thunderstorm running along Sandy and Lanezi Lakes to the south. The views from the campsite were only topped by those from the outhouse, which was found along a long boardwalk trail overlooking the surrounding mountains. After a couple of beverages to lessen the aching shoulders and arms, and some classic campfire storytelling, the crew tucked in ahead of their final day of paddling. 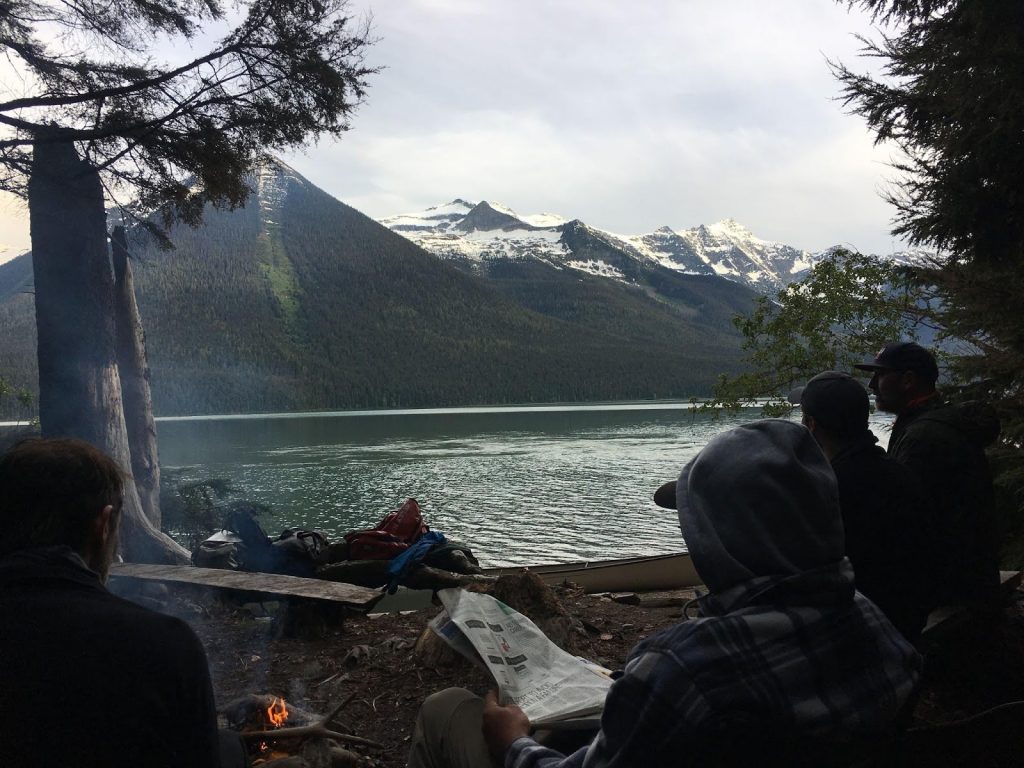 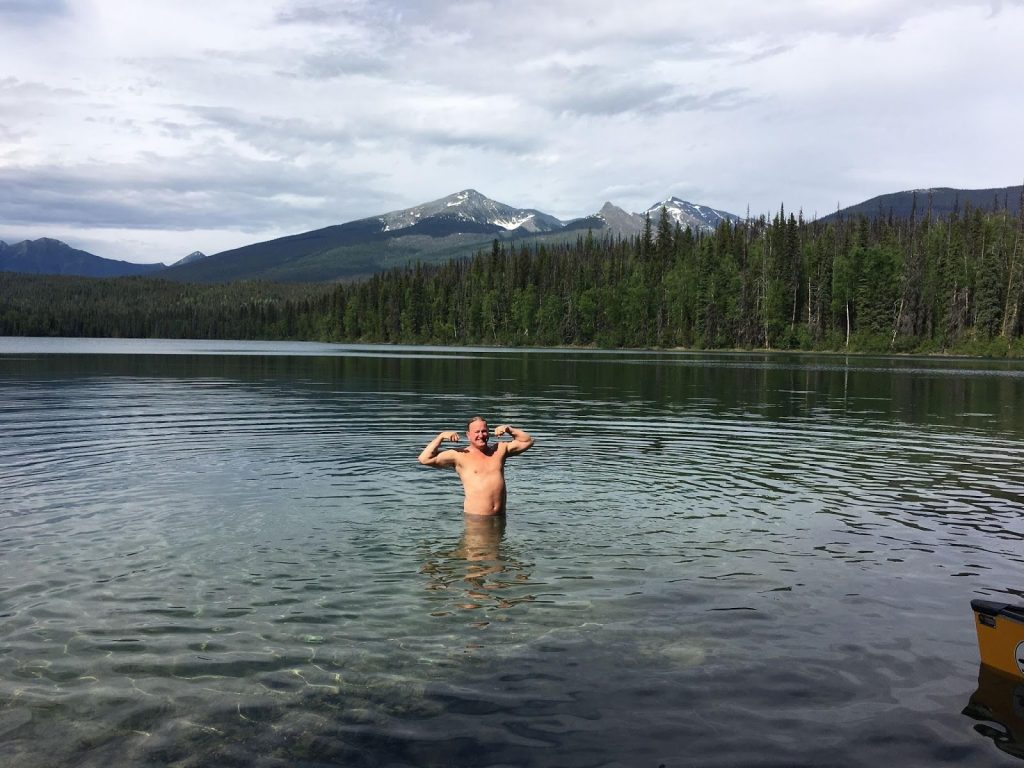 Day five saw an abrupt mixture of heavy rain and warm sun, plus a welcome tailwind to push the paddlers towards the finish line. A couple of bull trout were reeled in, one on Spectacle Lake and the other on Bowron, and the stretch of river between Swan and Bowron Lakes proved particularly scenic, with grass-laden swamps surrounded by distant mountain peaks. Eagles, osprey, mallards and moose were a common sight, including an up close and almost too personal encounter with a cow moose and her calf. After one final challenging portage to the main campground and registration centre, the BRMB squad’s Bowron Lakes canoe trip came to an end. 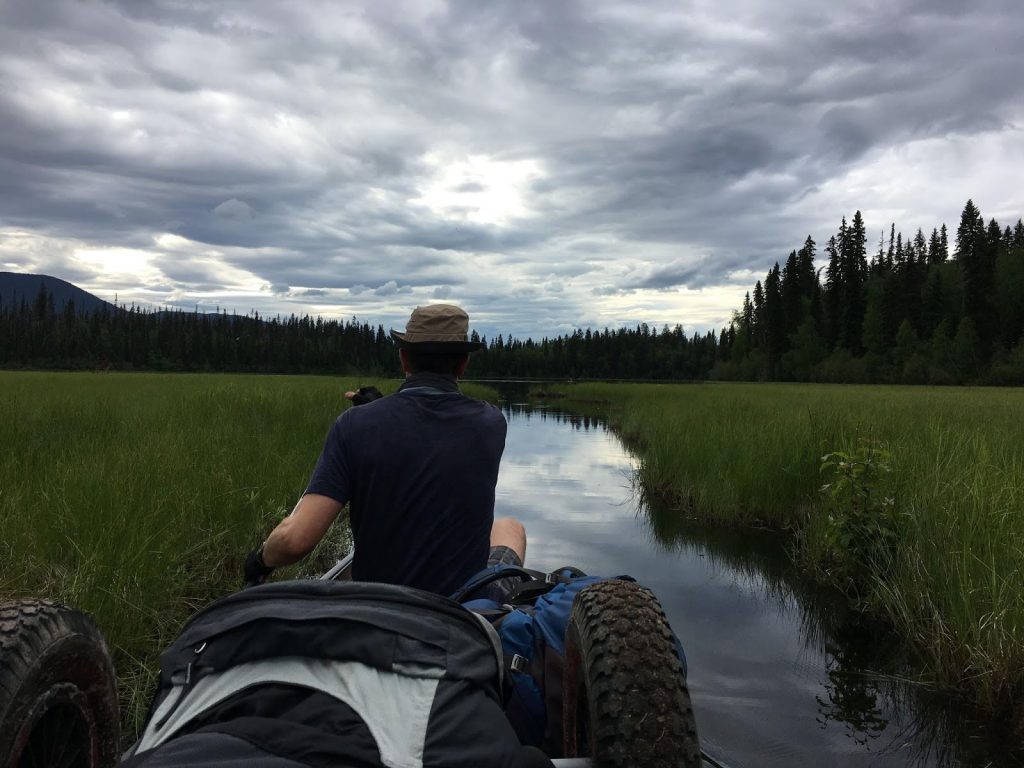 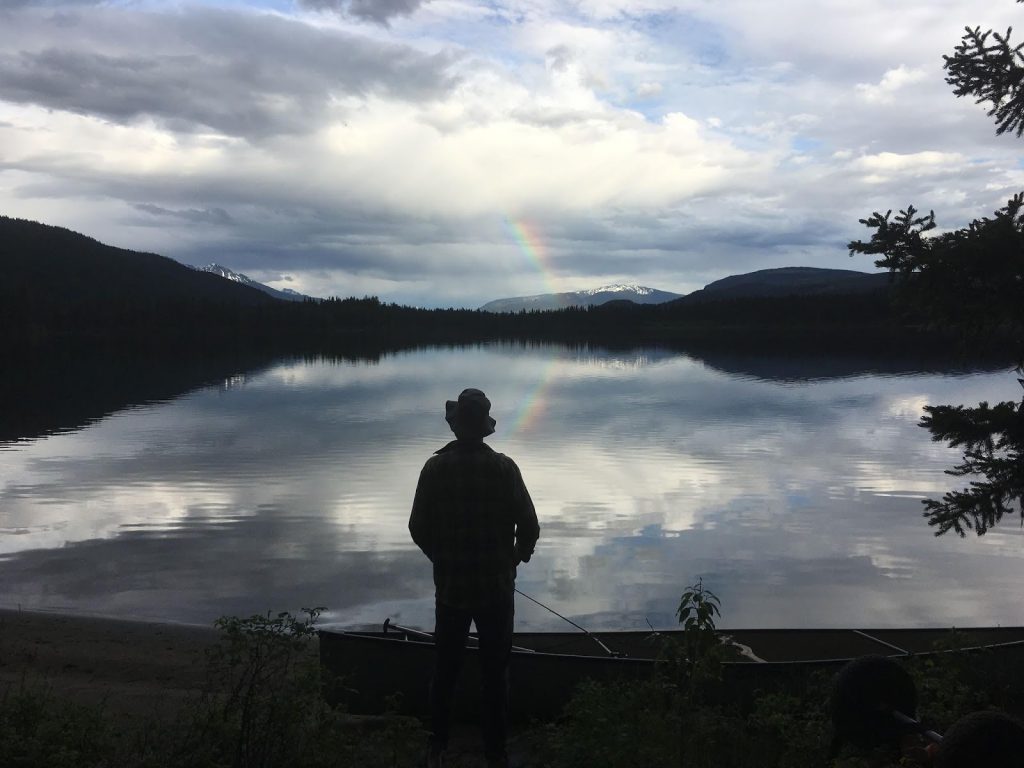 With a bit of time to reflect, Russ came up with this “Need to Know” list for those considering a paddle along the Bowron Lakes Canoe Circuit:

Want to star in your own adventure? Find your way here and to many more BRMB locations with the help of our Backroad Mapbooks and Backroad GPS Maps. No other map product gives you the breadth of road coverage that ours do, helping you find that secluded, unobstructed viewing area with ease.

Want to show off your favourite destination? Let us know in the comments below or share your photos with us on Instagram using #brmblife for a chance to be featured on our feed and win prizes.