The wild turkey disappeared from Southern Ontario in 1909, eliminated after 60 years of concentrated, unregulated hunting and displaced from their habitat by emerging farms and infrastructure. But as time went by and science progressed, The Eastern Wild Turkey was reintroduced to the region in 1984. Previous to this, there were several unsuccessful attempts to introduce wild turkeys raised in captivity to the region, only to eventually lose them to predators like hawks, racoons and coyotes.

The province of Ontario was tasked with making one more attempt to reintroduce these thanksgiving favourites to this region. Working with several American States, the Province of Ontario traded some moose, river otters and partridges for similar reintroduction programs in exchange for 200 wild turkeys to be released in Ontario. Between 1984 and 1987 about 4,400 turkeys were released at 275 sites across the province. The turkey population in Ontario is now believed to be as high as 100,000 in the province, which is extremely impressive despite being reintroduced less than 30 years ago. 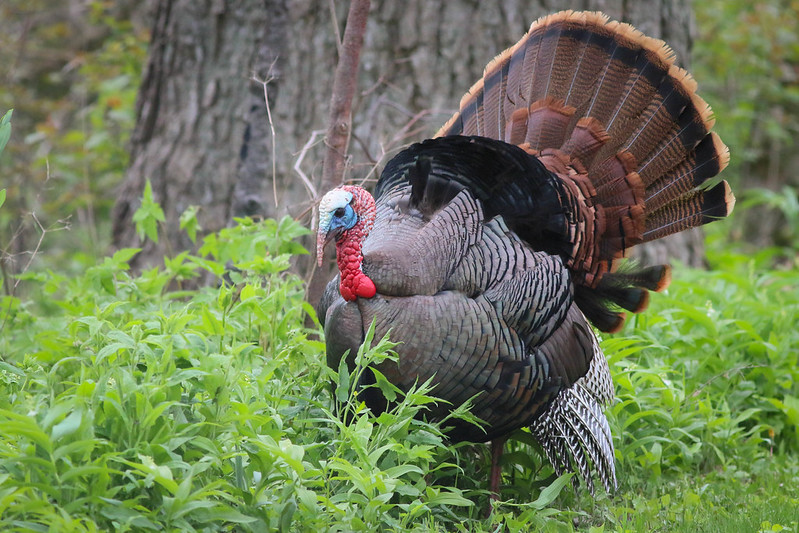 The population explosion can be attributed to the male turkey and his amorous ways. In early spring, the male turkeys vocalize with clucks, purrs, gobbles and a number of other distinct sounds to attract a mate. The hens yelp to let the males know their location. Male turkeys are polygamous, mating with as many hens as they can and this courtship begins during the months of March and April when turkeys are still flocked together in winter regions. In mating season, hunters will use Turkey calls to attract the dominant males.

Turkeys are highly adaptable birds and although Ontario conservation was concerned about their survival in harsh winter conditions, there have been reports of seeing the wild eastern turkey as far as the Canadian Shield. Unlike their domestic cousins and despite their weight, the Wild Eastern Turkey are agile fliers and fly beneath the canopy top to find perches in the trees above. Wild Turkeys are not marathon fliers and normally fly close to the ground for no more than 400 metres (a ¼ mile). 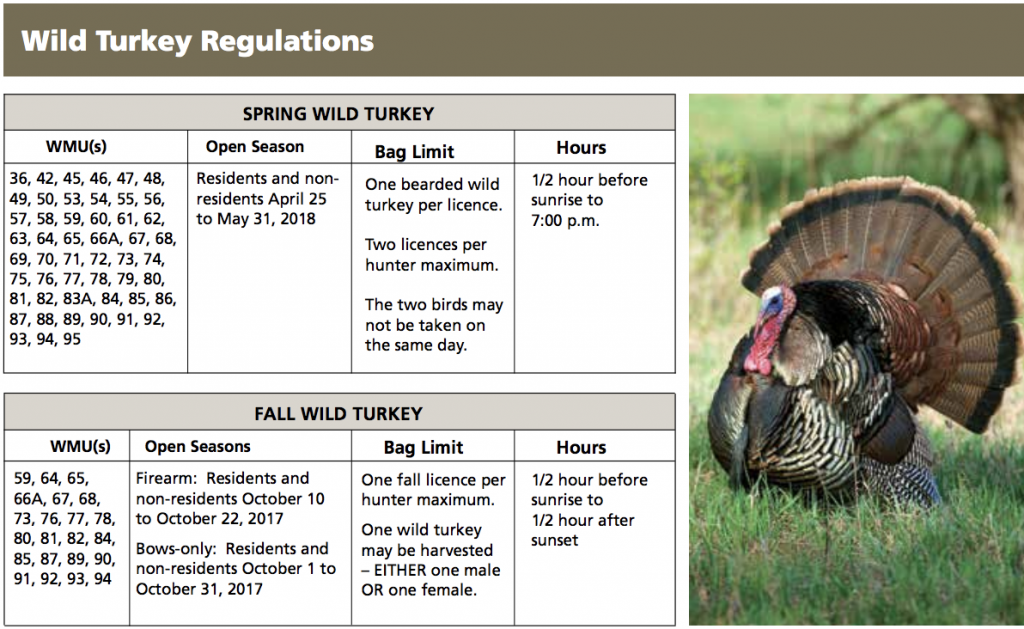 Like any other species of animal, you must obtain a hunting license before you plan your outing. In Ontario that is an Hunting Outdoors Card and to bag a Turkey you will also need tags for the species you want to hunt.

Be sure to brush up on the hunting regulations, including these annual updates on turkey hunting in ontario and remember to report your wild turkey harvest to the provincial government. For example, pay close attention to the number of birds you are legally allowed to acquire, and make sure you can identify a full grown male Gobbler, (or Tom), from an adolescent male turkey, referred to as a Jake, and a female turkey, known as a hen.

During the Spring Wild Turkey Season, only male turkeys can be targeted while in the fall, both sexes are fair game. This is due to the mating season and allows the hens to reproduce and care for their young to ensure the Wild Turkey Population in Ontario remains a success.

The success of the reintroduction of the wild eastern turkey to Ontario is a huge Canadian wildlife conservation victory. And while it is part of Canadian Culture to continue Turkey hunting, it is also our job to do so responsibly and keep encouraging the Eastern Wild Turkey to flourish in Ontario.

Get your gobble on with our Ontario maps! check them out now!

What are your wild turkey hunting tips? Share some of your top tips for spring turkey hunting in the comments below, or show us pictures from your favourite hunt by uploading them to Instagram and using #brmblife.